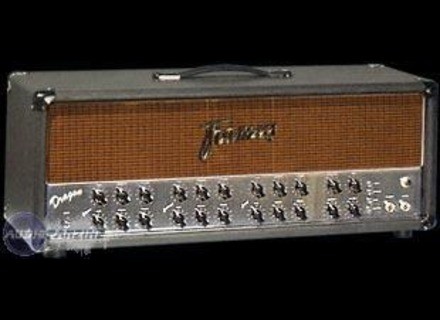 Framus Dragon
4
Framus has two main amps -- the Dragon and the Cobra. The Cobra tends to be a bit more popular, but the Dragon isn't too bad. The amp has three channels with 100 watts of power (EL34s), 5 12AX7 tubes, a parallel effects loop, MIDI, switchable master volumes, independent EQs, and a deep control.

The amp is laid out EXTREMELY well. In fact, this is how every amp should be. It's fully MIDI functional, so you can control everything with your own MIDI board if you'd like. Each channel has its own EQ, which in this day and age is a must. It has a pretty nice parallel loop, delivers tons of power and is perfect for touring. The only real issue is that the tolex on these models can be a bit thin, so the tolex might rip if you handle it roughly.

The Dragon tends to not be as popular as the Cobra, and I can see why. The channels are all pretty nice sounding. Clean is good, crunch is good, lead is good. The problem is that the amp itself is fairly dark. I can't get a totally chimey clean channel, and I find myself really cranking the presence on the crunch and lead channels to get that bite that I tend to look for. It takes boosts nicely, and it can really tighten up this amp to bring it into another dimension.

If you're looking for a nice head on the cheap, check out one of these amps. Just the fact that it has three fully independent channels with MIDI built in is ridiculous considering how cheap these go on the used market. I think Framus has a marketing issue as these are some real steals on the market. Just be sure you like darker tones as the amp is voiced pretty dark.
Did you find this review helpful?yesno
»

chacal549's review (This content has been automatically translated from French)

Brief .... almost anything should have a dragon head is on the go, we will not put 10 for the absence of full noon of a loop upstream of the SERIES parallle and the absence of small sometimes useful switches (bright, shift, etc ...)

Use in non twelve o'clock is very simple, all features are clearly comprhensibles

For MIDI a little look at the manual will ncessaire apprhender but 30 seconds of the concept ....

Comprehensive but simple and effective

For me, it is necessary Whereas the Dragon as a modern rock amp mtal that offer the luxury of clean and crunch dcents widely adjustable and versatile ....
I use this amp with a Carvin DC200 guitar and a peavey cabinet with celestion V30 412m Mount and G12T75 .... I oue of East mtal current "big sound"

The Clean is the most usable I had with a hi-gain amp. without cruncher, his rglages range from slamming and crystalline warm and round ... its only shortcoming is not having normment dynamics, in the lower particulirement
The crunch is trs enjoyable with lots of grain but still a EHJV trs dplaira clean and modern fans of the vintage. It has enough reserve of gain to allow hard rhythmic solos and small
is the lead .... dcoiffe it! normment gain a grain pais trs, trs fat normment frequency drives around .... a real amp nag! happiness both in rhythm than in solo. APRS Obviously it is in this kind of extreme that you feel that this is not an amp trs upscale and fat can be felt in cleanliness and clarity pchent a little compared to other more expensive amps ...

I edit and I think it adds a point for the following reason: quip with lamps less than slamming EH and a well bias rgl dcoiffe this amp even more and becomes even clearer and more Dynamic ...

And frankly, for the price, the Framus is an alternative to trssrieuse classics (we say powerball, correct and 5150) with features extremely compltes, a grain of characters and build quality ....

if you have 3000 euros, or ttez VHT Bogner, but if your plutt half of this budget is a try of emergency ....

cookie's review (This content has been automatically translated from French)" OUCHH!"

The setup is simple?
- Yes, a little flat on the use of the south which is not necessarily easy to understand.

The manual is clear and sufficient?
- Basically you plug, you turn the knobs, you play!

Do you get a good sound easy?
- Here's a bit complicated actually. Lamps and home bias in revoir.L EQ is nice and very responsive (mef). Attention to gain the lead and bass (it bombarded severe ^ ^)

Will it fit your style of music?
- Yes, the style "pop, punk, rock, neo-metal is imperial. For tech metal / hxc / mathcore / death I recommend a little. (But c'es my opinion ^ ^)

What kind of sound you get and with what settings?
- The clean the Diezel I find a clean that no saturation is still remarkable, even chacal549 opinion that the lack of dynamics.
Crunch is the type of distortion MARSHALL, with just enough frequency, gain and sustain.
The lead ========= GREEEUUUUUUUUUUUUUUH! a lot of gain, many frequencies (Yabon ham ...)

What are the sounds you prefer, you hate?
- The lead and clean channels are the two I use most, I like it. To me, this is the first time I played on an amplifier equipped with EL34. It's different but I do not interfere so much more than that this amp hi-gain is good enough.

For how long have you been using it?
- At any PT 3 months

Did you try many other models before getting this one?
- Pouff ..

What thing do you like most/least about it?
The pros: The look, the 3 channels, Hi gain EL34, a model not common
The -: That's pretty badly distributed and little-known fact. That the usage time will tell me something else

What is your opinion about the value for the price?
- The quality / price range is correct for this, I said what pump like what chacal549 is a nice alternative to ENGL and Mesa. The cautious will turn to better-known I think.

Knowing what you know now, would you make the same choice?
I think yes, is already good Framus guitars under Framus / Warwick. I just let go a Mesa dual recto for this amp (but it's crazy!).
I was looking for a right its a bit like ENGL, slimy both as a correction, it's done. For those seeking more in the style ENGL, touch COBRA instead.

I think these amps (Framus Dragon and Cobra) deserve a little more experienced in this difficult arena of Hi-gain. They have quite a place.

See all 9 photos of Framus Dragon »