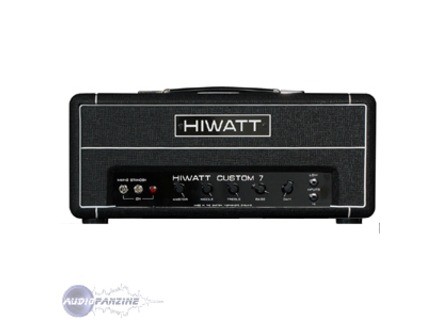 Hiwatt Custom 7 Head
5
It's a head could not be more simple: all tube, with a master EQ and gain. 7W power, but watch their ears it is well worth some headers (like the Tiny Terror) volume level. Two inputs (high and low impedance), an outlet baffle into 8 ohms.

One channel and a few knobs I can not see why it would be difficult to exploit this head. We get good sound when it turns Hiwatt few buttons, and strangely I found it offered a wider range of sounds than I could imagine playing with Equal.

I use this head for the rock / punk rock, I know it's a strange choice but it delights me completely. When you push a bit on the volume, we get a little fat but its a very precise and does not drool all over the carpet (it was strange, having only played with Marshall and Orange previously). The clean sound, if it does not serve me in concert, is simply sublime and it's very nice to play with it.
I use a Gibson Les Paul, no pedal for my lead sound. I have just the boost a little with a Boss OS2 for solos, and a vox wah from time to time, and this amp accepts far-reaching impact without flinching.

I use this head for a few days, I bought on a whim because I fell madly in love.
I was tired of walking around my big stack of JCM at Marshall, which weighs a ton and barely fit in my car, so I went looking for a smaller amp. I've tried several (Blackstar, Orange, Vox, etc.) and I flashed on this one, I embarked on.
The feature I like most is its power as a group (with battery) at concerts bar I'm two-thirds of the master and it's good to be able to operate the lamps without sticking his cabinet against the wall!
I was a little disappointed however that we should raise the overall volume for the gain, I can not play with a nice saturation overnight at least to wake the whole house.
I do not really know how to judge the ratio Q / P, I would have liked to compare this head to a custom period, but I never had the opportunity to play on that. So all I can say is that some powerful mind is what I found best, unrestricted budget and with limited only by the size, weight and power. I would do the same choice without hesitation with the same criteria.