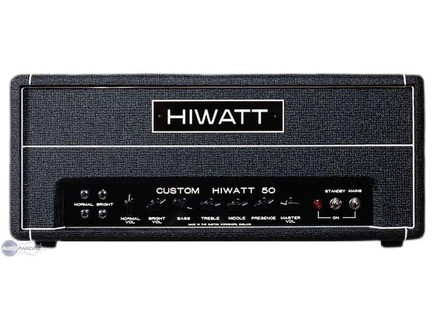 Hiwatt DR-504 Custom 50 Head
4
Everybody pretty much knows the Hiwatt story. In the 60's and 70's they were sort of a Marshall alternative for players who didn't have microphone amplification and needed a loud 100 watt amp to get heard in those massive venues. Unfortunately the need for such a thing had died out. Oh well. But that special hiwatt tone is still something a lot of people want. Me definitely included. I have tried a lot of the boutique (non) hiwatt named reissues but I decided to give the hiwatt 50 watt version a try. This is your typical half watt version of the old classic. Has the basic controls. No gain control obviously. Has high and low inputs.

A lot of people seem to think these sound best with the original fane loaded hiwatt 4x12's but I beg to differ. I actually use mine for surf and punk alt rock stuff. Nothing too crazy. And I find that it sounds very complimentary with a 412 loaded with greenbacks. It's kind of marshally but with the headroom and BIG sound of a hiwatt. These do sound very big and kind of bassy but at the same time there's a high end pang to the tone. It's a less focused sound than a plexi amp and it really fills up a room in a way no other amp can. It's pretty easy to dial in too. Actually, it's quite a simple amp to use and you don't need many pedals. It's one of my go to amps for plug and play stuff.

I really feel like I can only use mine with a Les Paul. It sounds alright with a telecaster, but for me personally this amp is at its best with the les paul at the helm. It has a sort of neutral tone to it that I find very satisfying. It's bassy and treble with a slight growl in the mids, although not quite marshally growl. I expect this amp can take a lot of pedals very well but I find all I really need is a good overdrive and a nice analog delay. It would be nice if this amp had a reverb but it's not a deal breaker really.

Is this amp handwired? I tried to find some info on that and the hiwatt site is a bit shady about just how 'handwired' these are. Seems like it' a gray area but it looks like they are partially handwired. For the price I would like to hope they are. But hey, I am really satisfied with mine. I have a reeves 50 watt too and this one stands up to it. They are both different animals but this one gets the hiwatt vibe just as well. I'm impressed with the build quality. It's quite heavy due to the transformers. This is definitely not a small practice amp or anything.

jujugratte's review (This content has been automatically translated from French)

We just easily get a very good sound, great amp reacts to rglages.

Personally I love Pink Floyd, Archive, U2 etc ...
With this head comes with two Celestion Vintage 30 HP and a small strat US EMG equipped.
It is true that this amp is amazing, clear sound breathtaking, a warm, round and very very sharp (or dfini, prcis) .IT transcribed perfectly your guitar playing ( ... so pay attention to imperfections ...). I think this little amp suit all styles simply s'quiper with pedals appropris. Personally I play Rock, Pop, Funk and a little blues and is perfect then for Mtal and other I do not know but there is no reason.

It is a dream that is accomplished is beyond my esprences. He responds my expectations. The sound is beautiful, every time I turn on the amp is rel happiness, I do not think better. was around 1 year and I have nothing in the world I revendrai.HIWATT AN EXCEPTION TO AMP
Did you find this review helpful?yesno
»

-Livingroom-'s review (This content has been automatically translated from French)" Tried the combo version, a killer!"

Configuration is very simple, one technique is to link the two channels by a dedicated cable (double male on one end, female on the other), the sound is good anyway, however refining thereof is difficult (like all great amp), all the knobs interact, and master completely changes the sound of a good clean rock'n'roll crunch (I must say that the hp plays a lot on it).

For all the people who rock (from punk to enroll), it works well. Furthermore, it is pedal friendly. Just there to add a little delay / reverb, it adds a strat and shoo, we fly at Pink Floyd. With a Les paul, crunch up quickly, and it's right as it should be: round and bite at a time.

No, really original config (called an amp 1979 anyway!) Is excellent.

I used it for a week in residence, and I kept my marshall for my project. I tried a bunch of amps, and it still survives mass! After it has a price, but it is the quality that does it.

Kal's review (This content has been automatically translated from French)

Standby for a good lamp sr.

no effects loop, no rverbe.

This amp can be used for both low that guitar, I use it with my guitar.

I put 7 as The characteristics are quite sober, nanmoins with an amp of this type (that is, it is not very young) should be expected.

The config is very simple sr, nanmoins must spend time to get a good sound, because you must choose a compromise ncessairement, knowing we can not change the sound of the amp in "time rel."

Gilmour uses this brand of amp (Custom 100 head but I think), has several heads available, Voil enough to have the sub and Racker gear for everything.

I play metal, but I do not fear exxursions in other styles, and this amp fits all situations.

We must play sr effects that you put between the guitar and the amp to really influence the sound.

I use it with an ibanez that has two humbuckers and one single, my compressor CS3, my DOD Grunge and a multi purpose yamaha stereo with 2 attack which I entered (one bright, one normal) .
The baffle is a vintage Hiwatt.

I get a sound that suits me well trs, according rglages round mdiums quite low, and clear sound with my compressor and chorus, I think I'm Gilmour.

It is much better suited to sr sounds clear (it saturates all fawn not), but with a good distortion you can get a good rsultat.

I think with a good pramp lamps must kill.

The 50 watts are largements sufficient for group play, I RULES pramps earnings of between 2/3 and 3/4 of the race, and the master does Exceeds never to half of its travel.

I use it for more than 6 months (it lends me), it took me a while to find her a really decent (I had never used before lamps amp).

this is an amp trs particular, be aware that we must make sacrifices in buying it (in ergonomics), it calls a configuration spciale.

on the other hand if you like that sound, it can not be of.

Difficult to find, we can do good business if you look closely (the price is secondhand trs variable, it can be found for really cheap, just the series have just been a rdite foutage prices of mouth, the crafty who may well be selling tents to sell prices foutage of mouth too)

Did you find this review helpful?yesno
»
Read the 10 user reviews on the Hiwatt DR-504 Custom 50 Head »