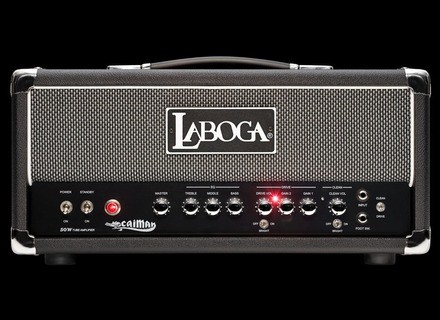 Laboga Caiman AD5300
4
I use it for rehearsals and gigs.
I've been using it for about six months.
I've tried before Orange, fender, peavey, koch. The orange doesn't distort enough for my taste, the koch is very synthetic and the peavey isn't versatile enough for my taste(?)
The clean sound is quite all right.
The distortion sound is excellent, I love it, it's very particular and ranges from crunch to hard rock!!!
It provides two distortion channels, crunch to play rhythm guitar and super distorted to play solos.
And the included footswitch is excellent!
Did you find this review helpful?yesno
»

Laboga Caiman AD5300
4
The amp has an ordinary design (the grill cloth on the front panel is identical to blackheart amps). While not beautiful, it seems pretty solid.

I changed the knobs, they weren't readable enough, in general (specially in the twilight onstage), so I replaced the chrome caps with good old black and white ones (the design is even more basic).

The amp features two channels, lead and clean. The second OD offers at least a "third" channel (only switchable with the footswitch).

Each channel features a bright switch (but unfortunately it can be engaged with the footswitch).

The master and 3-band EQ (as attenuators) are common to both channels.

The Caiman is very easy, you can master it in no time.

The Caiman is versatile, it excels at nothing but is great for anything!

It works perfectly with pedals (especially distortion ones) and it's a real plus. We have a champ here, no more struggling with bee swarms or electric blades.

The character of the clean channel is rather exquisite, without overdoing it, with a good headroom, very rock, '70s hard rock. I prefer to add to it a shredmaster or EQ it with a Boss HM 2 to get a dirtier and coarser sound.

The clean sound is clean, a bit dull. With Bright engaged, it's a treat, with single-coils and a reverb (what it lacks most, in my opinion), you are taken back t the '60s surfer scene.

The EQ is effective, the Caiman goes low deep. However, it cuts easily through the mix, the mids are present and it's a big advantage.

Your playing and the guitar's character are respected, the Caiman lets it all through. This amp gives me a sense of "constancy," it's the kind of gear that allows me to make the best of my playing, I'm not frustrated by a clichéd or borrowed sound (in the sens of "No matter what I do, I sound like...") Without having a particularly subtle playing, I immediately appropriated this amp.

I've been using it for almost a year.

I've had several amps and have tried quite a few, but it's the first time that I'm satisfied with the "factory" version (without tinkering with it). In any case, it's an awesome deal due to its versatility, power, ease-of-use, and price.
Did you find this review helpful?yesno
»

Very easy to dial in.
You get quickly what you want.
I needed 1 hour (or roughly 5 beers).

It suits me perfectly.
To play hard rock clean guitar.
With an ESP eclipse II...what can I say,

I'd rather just listen.

I've been using it for one year.
With the 212 cab.
• Speaker: 1 x 12" Celestion Vintage 30 & 1x12" Celestion G12T-75
I love the possibilities it offers. All in all, it's an excellent value for money.
I have tried out several tube combos before: ENGL, LANEY.
I finally found what I needed!
Did you find this review helpful?yesno
»

Laboga Caiman AD5300
4
Very good finish. It's made of (solid) plastic, the controls are pleasant to the touch and don't feel cheap.
The common EQ for both channels is a compromise, given the price, but it forces you to make compromises.
Technically speaking, half of the V1 tube is dedicated to the clean channel, while the remaining half plus a half of the V2 tube are consecrated to the lead channel. The last half works as a rectifier. Two transistors (I'll come back to this later) are found after the effects loop to split the signal and send it to a negative feedback circuit and then to the power amp.

It's comfortable to use, given its simplicity: You make a compromise with the EQ and play, and then you make a big smile because it sounds great.
The manual informs you of several precautions to consider with tube amps (impedance, pre-heating of the tubes), and it even indicates the position of the preamp tubes.
In terms of the controls available, the EQ frequencies don't suit me too well: The lows act too low, the mids are centered around the low mids (I would've preferred them a bit higher, but I must admit that it provides a good foundation), highs are not bad, and the bright controls are really effective (too much on the clean channel). As a consequence, I insert an external EQ to be truly satisfied and leave the one on the amp almost flat (with slight retouches to adapt it to the different speakers used).

It's hard to find a balance between channels at first, since it varies depending on the master volume (the negative feedback affects only the clean channel), and you'll necessarily have a level difference on the two "semi" distorted channels.

The target market is made up of rockers in every form, the gain headroom available is pretty large.
The clean channel can crunch, it's very sensitive to playing nuances and respects well the guitar's character.
The lead channel is pretty raw, with lots of mids and full across the entire frequency spectrum, which gives it a huge presence and cuts easily through the mix.
On the other hand, it's hard to use it at low volumes, because the transistors I wrote about before distort pretty easily and the sound becomes then less flattering. At higher volumes, the sound becomes nice again, thanks to the negative feedback, according to my favorite guitar tech.
The balance between channels changes: The more you increase the volume, the more the relative volume of the lead channel increases in relation to the clean. Consequently, I had the amp modified so that the negative feedback affects both channels all the time: That way the balance is constant regardless of the master setting and I even won some thickness on the lead channel.
I tested the output of the preamp (the send of the effects loop) with an external power amp and the sound is simply huge.

Little noise, fat sound, lightweight and compact, original. To me, the 50W of the tubes are the usable upper limit. Half would've been largely enough.
It's not my first amp and I have tried a lot of them, but it's the first one that gives me as much satisfaction. Just like peerk, I don't have the need to go looking any further. It's a very seducing amp (especially due to its lead channel).
Excellent value for money, given the sound and build quality.

I approve of it.
Did you find this review helpful?yesno
»
Read the 8 user reviews on the Laboga Caiman AD5300 »