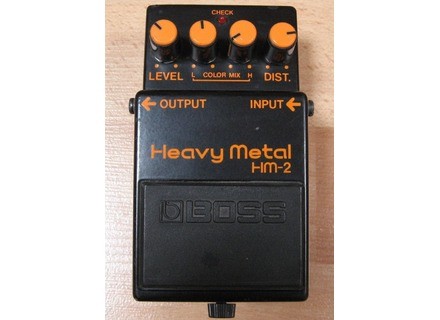 Boss HM-2 Heavy Metal
2
My Uncle had a ton of pedals and he gave me this one for nothign it was brand new but he just started playing with a Rock band that didn't need all the distortion.

I don't like to play with a lot of Tone, as a mater of fact I keep my Tone controls off so I get a more muted sound, The pedal has a nice distortion however it sounds better with my tone turned up.

I play on a Crate GFX-65 and to be honest I can get better Distortion off of that than I can with the Boss.

Can't complain about it.

Its Decent if your playing off a AMP without a lot of effects, but seriously if you want really good distortion or nice Overdrive get the Medal Zone and Super Overdrive.

Boss HM-2 Heavy Metal
4
I wanted a heavy tone that would also let me be very versitile. I got this one used at a Music-Go-Round for about $35.00.

I didn't like some of the noise I was getting out of it. It would hum a lot and I would have to turn the volume knob down a bit on it. I also did not like the fact that it had to real chunkiness to the overdrive. There was no real mid-tone in it. So whenever I would palm-mute things the distortion would become very bassy and it would be hard to tell some notes that I was playing. This particular model is hard to find now, Boss replaced it w/ the "Metal Zone."

It was light yet very sturdy and hard. I liked the metal casing that it had. It was really small and easy to carry around.

Boss HM-2 Heavy Metal
4
Anybody who has ever listened to old school melodeath has heard this pedal. We're talking everything from At the Gates to In Flames to Entombed and more. It's not your daddy's distortion pedal, and it's not for everybody. Hell, it's debatable as to whether it even sounds good. The one I'm reviewing is the Taiwan version, but after trying both of these side-by-side, they really do sound roughly the same. The pedal has knobs for level, contour high, contour low and distortion.

I never read the manual for this pedal, so I can't say how well it's written. However, I have read many other Boss pedal manuals, and they're always super helpful. I can't imagine this one being any less helpful. They tend to give you example sentences and clearly explain what every knob is. Thankfully, they're also easy to understand just by looking at them, so you can simply figure out what's going on by messing with the knobs. The housing is super tough, and these have taken some extreme abuse throughout their lifetime. I constantly see them beat up without any flaws what-so-ever. The pedal is FET bypassed, and if I recall correctly, it kinda leaks a bit with the gain cranked, but it's been awhile since I last tried one, so I could be wrong on this.

The HM-2 is very controversial as to what sounds good or not. First of all, these knobs are crazy touchy. You can get some extremely different tones by just moving the knobs a hair. If you've ever played a Mesa style amp, you'll know what I'm referring to. It would help to have tape to fix your settings in one spot as it can take awhile to find them again. The pedal is brutal, and it works great at slamming a clean amp into outrageous distortion. My favorite usage of this pedal is to get that Bloodbath style tone. To me, they have the best HM-2 style sound, and that's really what the HM-2 sounds like. Entombed is another good representation as to what this pedal is like.

Don't expect to use this as a clean boost. It doesn't really work the way a tubescreamer does, and the distortion in this is extremely brutal. It's almost too over the top for most people, but if you want that old school melodeath tone, this is what you're going to have to go with. I wouldn't bother too much with the differences between the Taiwan and Japan versions as they're both roughly the same, sound wise. It's not like the DS-1, SD-1 and others where it kinda matters.

Boss HM-2 Heavy Metal
1
This goes into WTF are they thinking category. I mean what do they expect this to sound like a hyped up Marshall JCM 800. This pedal is so bad that I find myself thinking why did I spend anytime with this pedal knowing full well ahead of time that this pedal is not going to sound good at all. Back when trying out the guitar for the first time it seems like a lot of beginners try out pedals like this. So I had number of friends who had metal type pedals to which every single one of them sounded horrible. This pedal is no exception. Running my fork across the plate sounds about what you get out of this pedal. It may even sound better. I know that Boss is tailoring to the metal market but come on this thing sound like garbage!!

It has four control knobs consisting of Level, two Mix knobs, and a Gain control.

It is easy to use but the sound you get won't be pleasing. I can't find one way of getting this pedal to get anything worth listening to no matter how you attempt to dial in the controls.

The best thing you can do I suppose is set the thing to OFF and buy a decent amp. Then take the pedal and throw it off your roof. The sound of it breaking against the wall will bring joy to your ears. So you want to sound like Randy R or Warren D or Mick M ......don't buy this pedal.

There really isn't any way you can throw a guitar or amp in front or behind this thing to have any workable sound. Try using a Les Paul or a Super Strat and you won't sound like CC Deville. Try using a Marshall JCM 800 and Kerry King is not an option. You know what is an option....not buying this pedal.

This thing sounds thin and metallic to which sounds nothing like a tube amp at all. No active EMG pickups or Dean guitar will help you at this point.

So I think I made it pretty clear how I feel about this useless pedal. The only thing I think it has going for it is that Boss made it and it will last forever. So you'll have garbage tone forever if you so choose to waste your money. Listen to some youtube videos before you decide. You can pick the pedal up on ebay for about $50 but I can think of a lot of things to spend $50 on.

I would not recommend this pedal to anyone. Boss makes good OD boxes but not high gain boxes. This is a big old pass for me and it should be for you as well.

Did you find this review helpful?yesno
»
Read the 17 user reviews on the Boss HM-2 Heavy Metal »