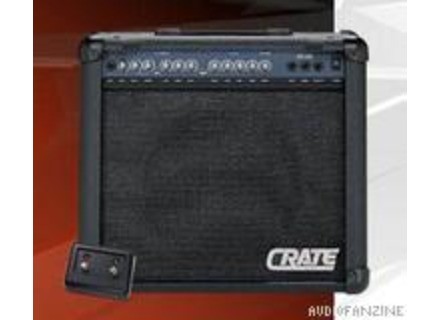 Crate GFX-65
5
There seems to be a lot of negative reviews on Crate solid state amps. I've been playing guitar over 40 yrs.. I'm not a beginner. I've owned and played through a LOT of amps. I have modified and upgraded many amps as well. I've done solid state, hybrids, and tube amps from low end to high end. I currently own a Crate GX212 and GFX65. I play mostly classic rock, southern rock, jazz, blues, and country. I don't use the high gain channels on the Crate amps because I'm not in to metal or heavy distortion. I absolutely love the clean channels on my Crate solid state amps. They have plenty of punch(guts) with chime and sparkle. I use pedals for overdrive and light distortion. These amps IMO are some of the best amps for clean tone and clean headroom. They have more than enough volume for gigging. Except for the Jazz Chorus 120, the Crate is my go-to amp for almost everything I play and every place I gig. I set mine up by dimming the bass, mid, and treble. I then back off which ever control that I have too much off. IMHO these are excellent amps....especially for the money!!

Crate GFX-65
1
I need a slightly more powerful amp for home. I have a Fender Frontman 15G that I got with the Squier Pack a little while ago. I bought the GFX65 for $359.00 at Guitar Center after listening to the 120 watt version and I thought it sounded good in all FX modes and it had a nice built in tuner. Boy was I wrong

There is really nothing I like about the GFX65, well maybe the case. The effects are OK when they work.

The speaker cracks and pops on every note. Don't turn the either gain up because the hissing noise is unbearable.

It seems pretty rugged. The back plane is wide open with a cheap jack panel for the three button foot pedal. That thing seems like it's made of cardboard too.

Don't buy this amp. It went back today and I paid a little extra and got a Marshall Combo. NOTE: My wife and I have this on going argument about the value of things and this really proved my point. You have to PAY for quality. IF you buy cheap you will not get good quality!

Sounded pretty good at low to moderate volumes. Effects were nice to have. (While they worked!)

At higher volumes this P.O.S. farted and crackled like a mofo. Effects were limited at best. The effects quit working after about 4 months of use. Tried to send it back to Musician's Friend but they would'nt take it because it was still under the manufacturers warranty. I called Crate (Crap) and they told me to send it back and they'd fix it, but I had to cover shipping both ways and insurance. It would have cost me $80.00 to do this. So I said fuq it and sold it to a pawn shop.

Cheap a$$ light weight fiber board and flimsy plastic. Made in pieceocrapistan.

Save your money. Buy a quality amp from a local dealer.

It's very portable and the built in digital effects sound pretty good, although the ability to
tweak an effect is very limited. On the clean channel it starts to sound a little compressed
at higher volumes which is actually kind of nice. The FlexWave distortion is adequate at
best- on the gain 1 channel it is obvious that the sound is coming from a solid state amp,
but on gain 2 with the shape effect it sounds very nice.
I have had no problems at all with this amp and I have played it in numerous different
places including an outdoor show where it was below freezing- try that with your vintage
tube amp.
I have yet to run the amp into an external speaker, but I have miked it through the PA,
and that sounds great.

As mentioned above, the effects are nice but there are limits to the settings you can
choose. Also, the gain 1 channel sounds a little cheezy. The amp is also somewhat
volume limited, but that comes with a 65 watt amp with a single 12 inch speaker, and
can be overcome by adding extra speakers or miking.

Rock solid- I've had no problems at all with it.

For a relatively cheap amp it is a very good deal and will work for most amateurs
or as a practice amp.

This review was originally published on http://www.musicgearreview.com
Did you find this review helpful?yesno
»
Read the 7 user reviews on the Crate GFX-65 »