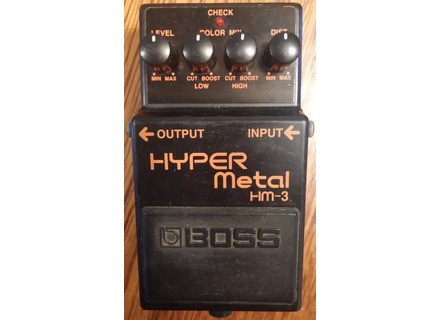 Boss HM-3 Hyper Metal
4
I got this pedal from a friend while searching for the right combination of equipment to get a really heavy, distorted sound. I paid only $30 for the pedal & power supply in perfect condition.

Besides being very well built and simple to operate(4 knobs including volume, high, low & distortion levels)it allows a wide range of tones from fuzzy to completely ripped. I love the growling low end it gives while allowing my high end leads to really scream clearly.

I haven't really found anything about I dislike.

I recommend this pedal to anyone looking for a heavily distorted metal sound, well worth the effort of finding one.

Boss HM-3 Hyper Metal
3
When the HM-2 was discontinued, Boss decided to try to recreate a similar pedal with the HM-3. It's like the bastard child between the HM-2 and the MT-2. It was the transitioning period, and as a result, it's not quite as good as either of the pedals. Then again, it's debatable as to whether the first two are good at all, so keep that with a grain of salt. The pedal features a level, contour high, contour low and distortion knob. It's actually very similar in layout to the infamous HM-2.

These pedals are built to withstand pretty much any abuse you can think off. They can be stepped on, thrown across the room, smack with who knows what and can even sometimes withstand the occasional beer spillage on stage. The housing has proven to be one of the most reliable housings out there, and it's had 40+ years of proven track records to back that up. The manual is clearly written, and there are also some example setting you can check out in case you don't know where to start with this pedal. The pedal uses the standard FET bypassing, just like almost all Boss style pedals out there. It's decent, but true bypass is better, in my opinion.

If you loved the HM-2 sound, you might be able to dig this. It's not quite the same, but it's in the same general ballpark. It's a brutal distortion pedal that can really drive an amp into insane overdrive. It's great for that old school style melodeath tone, but it doesn't seem to recreate the magic HM-2 sound. If you're an HM-2 purist, you'll probably not really like this pedal that much. If you like the MT-2, you'll probably hate this. It's a lot fuzzier than the MT-2. It's more like a crazy overdriven fuzz than a bright distortion pedal at times.

The best way to describe this pedal is average. It's somewhere between the HM-2 and the MT-2, and it doesn't do either of the sounds quite as well as it should. It can work for that melodeath sound in a pinch, but it won't be the exact same as the HM-2. It's not really as good as the MT-2 when it comes to slamming the amp with some extreme modern distortion, but it can get you some classic brutal distortion if you mess with the settings a bit.

Boss HM-3 Hyper Metal
3
This pedal replaced the Boss Hm-2 back in 1993. It lasted on the market until 1988. It has basically the same parameters of control but they did make a few adjustments. One being they increase the gain on this version. So you had a lot more gain where as the previous Boss Hm-2 has gain in shift and woulnd't change until you hit another hour on the control knob. What I mean is that the gain would not swell naturally as you would turn it up and it would remain unchanged until you reached a certain point and then the gain would start moving again. The fixed this problem in this pedal for a more fluid swell of gain as you move the control clockwise. You also just had more gain on tap than the Boss Hm-2. The Boss Hm-2 was very popular and never really came through in the market because of the large popularity of the Boss HM-2.

You should try this pedal with a humbucker installed pickup. The pedal is still bright and metallic sounding. You cannot dial out the thin piercing bright distortion tone from this pedal. Most pedals in my opinion have a processed sound no matter if they claim all analog signal path or not. They just feel processed and you can really hear that in the upper fret register when you play some of the lower notes.

These pedals stopped production in 1999 and the used market is the only way to go now. they are pretty cheap to get off the classifieds or ebay. If you have a Fender amp and want to play metal I would suggest a pedal from AMT electronics. They have great metal pedals. this one is not a very good sounding pedals. Don't waste your money.

ukio's review (This content has been automatically translated from French)

Boss HM-3 Hyper Metal
3
Boss HM-3 Made in Taiwan, 4boutons ADJUSTMENT "Level" for sound, "Color mix: low and high" and "Dist." much more on the pedal to engage the pedal.
It is very banal.

It's quite tricky at first you do anything! Fortunately the manual is fairly simple and gives you a few shots of settings such as "Hyper metal sound", "Heavy Metal" "Metal Slash", "Hyper rock sound" "Old tube sound" Etc etc ... If you want to cre your own settings is a bit more complicated but feasible

The pedal to its name .. HYPER METAL! well it's big heavy style huge distortion!
In addition, the more the distortion augemente more sustain is long .. we even let it ring a little note very long! Of course you can also adjust the pedal for a slight overdrive ... Which is not bad at all .. the only criticism I would Aque the pedal is that its crachouille from time to time to see if we both made a poor adjustment of the feedback and it is inaudible ..

It's not bad at all ... I regret this purchase even though both of his drool ... so pretty

Did you find this review helpful?yesno
»
Read the 9 user reviews on the Boss HM-3 Hyper Metal »