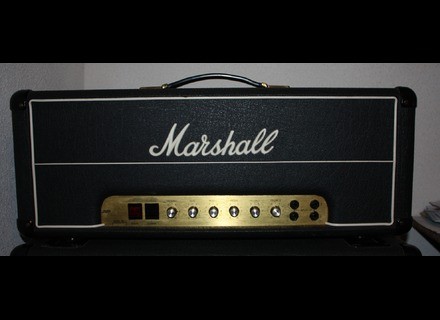 Marshall 1992 JMP Super Bass [1967-1981]
4
Superbass the 1992 mk2 is the version "printed circuit of the old standard version of the same name. We find the same components, same layout, with the difference that the signal does not pass more by cables, but tours to reach the components.

The head is testing here is original in every way, only the T tubes have changed several times in his life.

We will not remake the world flights Audiofanzine! If you clicked here is that you may know what that marshall prs. A single channel head, bnficiant two inputs (one low, one high) and two DIFFERENT voicings for each pair of (not named at all evocative of I and II). ^ ^ Each pair of both optimized to meet one humbucker guitars a little more gaineuses warm, or single-coil guitars.

The amp is dpourvu master, loop effect, any effect intgr nor even the slightest reverb. The naturally lit by a battery of lamps 100w ds catapulting the sound we approach 4 to the Master is in the spirit of the era, but today Completely unusable.

Say simply: "Whoever needs a manual for this machine, or stress is the multitude of buttons should go look at Atmar amplification. For here we are in presence of the union minimum for most guitarists.

For myself I find that the sensitivity potentiomtres are not very effective and they make use of correction Plutt cosmtique than A veritable sound shaping tools. Only the gain causes ral sound card.

The absence of master grows, moreover, the user mount the gain for the crunch. And even with a attnuateur could cash a 100w amp, it abdicates the approach of "3". Too powerful for use in interior, unless you use the cream of the cream in attnuation (faustine phantom, ultimate attnuator, Koch et al.) For my part, Faustina helped me find all the nuances qualities / default sound of the amp that does not give me vhm. I&#39;ll take him a publicity deserves here.

Note also that the head of the Tolex is fragile and the noise level is absolutely amazing. I have approached with a 140 db and fullstack collgue 1959 slp branch ct. Cel is a blast of the weapon at dcollage.

By-cons, the reliability of all no doubt. Mine the date of the beginning of the 70s and has never to be repaired. I am also a big lucky, because it is in new condition. Which is a rarity in itself and makes my heart beat faster collector.

As in the test of 1959 SLP (of era), it shall be immediately struck by the musicality and the breadth of the sound spectrum. Fly high treble and bass, organic body is fawn cohrente in the lower spectrum of course, the serious lack the ease o ct a compact JCM800 but they do not twist dsagrablement as one might see elsewhere. However, I would use this amp with standard tunings (for guitar).

Big surprise for me, this amp is absolutely silent ease in the clean. First dry, it is richer and Arian before tipping in the crunch. He does so happens the jtm45 Galer, amp references of the mark. In addition, the 100W can grow with this clean power before switching to the crunch. It apprciable, especially live. But is not his only forte. I also will appreciate the fluid with which the head moves forward into the crunch. Some heads, even very good, sometimes have trouble with this exercise. This is not the case here. So, we just go with Specialised guitars (Gretsch White Falcon, Fender Telecaster), get it and get the authentic sound of era.

The crunch seems to me in all areas, a little rounder, a little more depth on the ax, his sister slp 1959, and in all the frequencies. If a comparison be silent, you could say that 1959 is very quickly a sort of veil in the raucous sound. Sailing here is softer, and later apparatre. This translates as a gain to challenge a little less, even if already sufficient for all styles that is likely to expect that gear. I note that the crunch is a bit more plump than the SLP, a little more "brown sound", but I put quotes on that term. Trsdcal often in the interpretation that may be.

I noticed a small trend work on the bass string. Cel is probably the tubes and I will correct / confirm This phenomenon ultrieurement.

Gloablement, this head is admirable, both in view of his age, as a whole. Allowing a game very expressive and effectively translating the nuances of the performer, while retaining the character of the basic instrument. Moreover, as long as you speak, and I not use a real positive effect on low-gain guitar amplifier. O The dean and the warrior seemed a bit "stiff" when I was pushing the amp with the pickups funds, I had a pleasant surprise dscendant gain from these past half. The sound flies so much more smoothly and the adventure becomes pleasant.

But this amp is basically a bass amp. And it would make him little honor than not, quickly hook up a bass.

The sound, in this usage is extremely original. Indeed, I have found the sound Motrhead with the aggressiveness of its own. By-cons, Miss fatigue normment the Behringer cab that seemed to die when we really sent the pure (despite a threshold in watts more tolrance lev on paper). On the Ampeg cab, catch the sound of balls, and you could pound with srieux agreements rson in space with a beautiful musicality. I loved the crunch beaucup perfectly smooth yet aggressive, which would DGIG.

In addition, 100w normissimes find here their full place in the mix between two lamp mchants amps mesa. If we make a contest of "bottom bottom bottom," the superbass can not get ahead of the mix. But it does not overwhelm and leave taking, almost naturally, its place (if collgue agree to lower their master "8".

Excellent amp for bass. We forget.

The 1959 superbass is resolutely a forgotten pro marshaller. His sound, a little unusual and little used by the big names in the rock scene, we paid a little less research and, hence, more accessible to fans of his era.

1000th note for a perfectly preserved copy with no grip and without the electronic squawk. It is admirable and would slap a srieuse those that pretend that the marshall&#39;s are not reliable. Not only does this head is indestructible, but a precious sound partner for all lovers of these sounds.

MaxxWam's review (This content has been automatically translated from French)

Marshall 1992 JMP Super Bass [1967-1981]
5
It's a head lamps amplifier, 4 power (EL34) and 3 pre-amp (12AX7). These are the same lamps as the models Superlead and 1959 SLP. This model was manufactured from 1966 t 1980. In 1976, the aesthetic has reviewed and t in 1980, cda its place JCM 800 Bass Series. The power is 100 Watts, but then a true 100W amp lamps. The Connectors are between 2 spars channels and for each channel, Hi and Low sincerely .... but there are no differences between Verily to input 4 which are unlike a Superlead possde Hi Treble and Normal channel, the Superbass has 2 identical channels Normal Volume 1 and Volume 2. exit, 2 speaker outputs 1/4. There are no effects, no loop for not more effects, Presence, Bass, Middle, Treble, Volume 1 and Volume 2. a point that's all ... Oh yes, there is the s impdence reader has the rear which we must be careful not to lose it. This is a PRVU amp for bass guitar, but is used by mostly guitar. Especially since technology evolves with more rcents transistors amps.

The configuration is very simple (see previous paragraph). The sound ..... oh yes .... Marshall .... Is that clear enough? For a bass guitar, the amp is rather 'mid-range' 'but the presence is standard and the awesome power ... with volume 1 is optimal sound dj, the Volume 2, all tremble around you for a great room ... but we think 5 cel takes very efficient speakers. For the guitar is essentially a Superlead or a 1959 SLP, but without the Hi-treble channel .... we have the Marshall sound, but with a little more crunch, but a little less possibility of adjustment ... but also a power curve that rises less rapidly.

I have in my possession since 1986, but I have not used 1998 2004. I had a few problems during this period the electronic or not less than 5 technicians pass s above .. to finally have found a who remont me ... it's a new amplifier must be manipulated with care (besides it is very heavy with 2 large transformers) should not be placed on a sound box that vibrates a lot (no prob with the guitars with a.). I use little Introduced, but I have in my possession a pice collection found less today (the pieces as hh!) .. . The things I dplore are: its significant weight, fragilitainsi the rarity technicians able to do service .. most are: His presence and standard power, its look, its rarity (collection). For the guitar ... this amp is considr if you like the sound typical for low ... Marshall, we did better today.
Did you find this review helpful?yesno
Cookies help us improve performance, enhance user experience and deliver our services. By using our services, you agree to our use of cookies. Find out more.