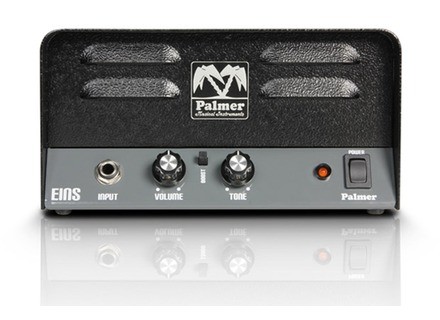 TheJeff666's review (This content has been automatically translated from French)" plug and play!"

volume tone, hard to easy. manual anecdotal, but is it really useful?
I use it only by the emulated output in my home studio, accompanied by an AMT SS11B and two palmer pocket amp (excellents. ..) for stereo guitars.
The sound is rough around the edges, a lamp its very roots, warm and distinctive, but still transparent depending on used guitars, gain and the game .. the response to the attack is very good.
the balance between the volume of the guitar and the amp is very important, do not hesitate to turn down the volume on the guitar for a wider range of sounds.
One regret the tone that I've wanted wider and effective ... but can be corrected taking or mixing.

With this small Palmer Eins, I have access to a wide range of vintage sounds and lights typed (a former ...). Sounds are clear and expressive live, they lack a bit of shine to my taste (hence my criticism of the tone), but I'm a fender boy ... the crunch are great and the boost can attack registers more muscular, but beware, no further qu'ACDC ...
Importantly, despite a typical grain, this little amp fully respects your guitars (I have seven very different and strong personalities), and the volume and dynamics of your playing the pedals going very well, but I ' generally used in direct or just drive with a very light and sometimes a little spring ...
For most modern grain (crystal clear and chiseled, big or hard metal distortion ...) Well it is something else ...

A small amp resolutely rock & roll and attaching of the surf music brit pop, to blues and hard 70 passes easily into the mix with its output emulated. It plugs, adjusted earnings, it plays and sounds, I love it!
In over 25 years of guitar, I tried a bunch of amps, and a lot of good. no question of comparing a mesa, a fender or a good brunetti, it is not the same price or the same purpose.
I'm totally refractory to other pods and eleven rack, as well as software simulations (I kept Amplitube tuner for his very accurate). it's nice to work and play, but it comes to music, and to place it in a mix, it becomes a mess ...
With Palmer Eins, I branch, I start recording, and I immediately a result bluffing and usable without any brainer, especially without even spend three hours or compress ...

See all 36 photos of Palmer EINS »

View all 2 videos of Palmer EINS »