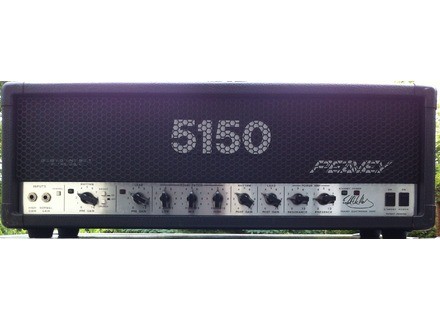 everything. At first I saw this compared to the 5150 II and saw that the second unit had a lot more knobs. Better right? NO. Yeah, i can get whatever i want out the the head, i just have to play around with it. Dont believe all of the crap you hear from other reviewers about it having a dirty clean channel. It all sounds better than fine.

I didnt like paying a lot of money for it. But i dont like wiping my butt and I got over that ok.

I would suggest buying this from a music store instead of ordering it from a catlouge or ebay. I had mine spend about 3 weeks in a shop because UPS screwed up the tube filaments and that was also the catalouges fault because somehow they installed ruby tubes in it which peavey never uses standard and they dont do to well with shipping.

Just buy it. Im 17 and I cant afford anything but this truely is the best thing you cant get for any amount of money. Its very practical and if i would spend 700 hundred dollars on anything it would have to be the best. Just dont buy solid state.

Peavey 5150 Head
4
I was searching for an entry level tube amp for a couple of different styles. I was looking on ebay at a couple of Marshall's. Namely a JCM900 50 watt head. Then I was approached about buying a used original 5150 head for $420. Well I thought to myself, thats a decent deal, peavey makes good amps, go for it. So I bought the amp in a private transaction, and the rest is history

I've had this amp about a year or so now, and its great. I put JJ tubes in and used the amp with a Carvin 2x12 with vintage 30's. With the right eqing you could get a lot of different sounds. Mainly complain about the clean, but if you lower the preamp gain, use an eq and a reverb, and punch in the bright button, it makes for a very nice clean sound. Also if you punch in the crunch button on the same rythem channal, you could get a gritty texas blues sound. Now we come to the lead channal. This channal is all about big gain. Since it was designed in part by Eddie Van Halen, you know you could get that Van Halen crunch out of this thing. It could really comp just about every other modern high gain sound

Well its heavy, at times noisy, and the stock bias setting is very cold. Its rated at 120 watts, this means lots of tubes, a big transformer, and a lot of wiring. This makes for an amp that weighs in at just about 60lbs. The rectangler shape of the head makes that 60lbs real heavy. The amp is a bit noisy, but with good tubes and a noise gate its quite controllable. Also the bias is fixed and set very cold. I've decieded to modify the amp for a bias trim pot. This should warm up the amp a bit, and add some picking dynamics. Generally just change a little of the character.

For $420 used, I have a rather well built amp. Peavey makes quality stuff, and they stand behind it. You won't get the maticulous construction you get out of a Soldano or a Bogner, but its sturdy and thats what matters.

In all I spent $420 on a big monster tube amp, that sounds good and could be toted to a gig. Combined with the $330 carvin cabinet, I have a complete rig that costed me under $800. To me thats a lot of bang for the buck

This amp is killer. It is very easy to get a good clean, dirty, or lead tone out of. It is a simple amplifier head, with no real frills except an effects loop, and has been a staple amp head in rock and metal music since the early 1990s. Edward Van Halen had this amp built and voiced specifically to his specifications, and so the EVH tones are incredibly simple to achieve, but the 5150 can get many other sounds as well.

To start off, this amp is LOUD! It has so much headroom, it's ridiculous. If you can get it wide open, you will be greatly rewarded with a pure crystalline clean tone with plenty of presence, a neat crunchy brown tone with plenty of meat, and a liquid singing sustain that responds to the slightest touch. I've used my 5150 for classic rock, hard rock, metal, hardcore, fusion, djent, death metal, and it excels at all those applications. It even gets a great spanky lead tone for country chicken-pickin'! The main drawback is that the 3-band EQ is shared by both the lead and rhythm channels, so one must find a setting that works for both channels. Also, I wish this had a reverb, but I'm nitpicking on that point.

This is a great amplifier in the pantheon of screaming rock classics. This is a fantastic amp for any subgenre of rock from the late 60s until now. There are certainly other amps that can get more tones, or can offer more glitz and glamour, but for a meat and potatoes player, this is the head. Highly recommended.
Did you find this review helpful?yesno
»

Peavey 5150 Head
4
The Peavey 5150 head was designed in the early 90s by one Edward Van Halen as a signature amp and at the time was touted as the answer to getting Ed's famous Brown Sound. However, many modern players discovered that the 5150 had a certain crunch to it that was ideal for heavier metal settings. It delivers 120 watts of power and is run by 6L6 tubes. The 5150 has two channels, channel one having more of a "clean" application and channel two being more of the high gain side. It has a shared EQ with presence and resonance controls in addition to the standard bass, middle, and treble. It also has an effects loop as well, great for running time based effects

Getting a good tone out of the 5150 is very simple. The amp is loud and high gain but the EQ controls are very responsive and easy to dial in for great tones. Peavey amps as a general rule are very "player friendly" and the 5150 is no exception. The tones are good just about anywhere that the controls are set and it works well for a whole host of modern sounds.

This amp sounds best to me when using thicker sounding guitars such as Les Pauls, SGs or Flying Vs. The sustain is really quite good with this amp and the tones are very meaty and full, especially in a band mix. The clean tones are not the amp's strong point - the clean channel is really more of a crunch channel. It sounds great for really gritty clean tones or classic crunch sounds with the gain dimed. The second channel is where it's at for high gain molten metal tones, and it sounds especially great for chugging rhythms or sustained modern leads. Definitely a tone to be reckoned with for high gain brute force.

All in all I think the Peavey 5150 is a truly cool high gain amp. Though it might be a bit of a one trick pony, it does that trick extremely well. It's perfect for the modern metal player who needs serious doses of high gain tones at high volumes. They can be had for about $700 used if you look which is a very good price for a high gain, great sounding head that's made in the USA, definitely worth the look.
Did you find this review helpful?yesno
»
Read the 24 user reviews on the Peavey 5150 Head »