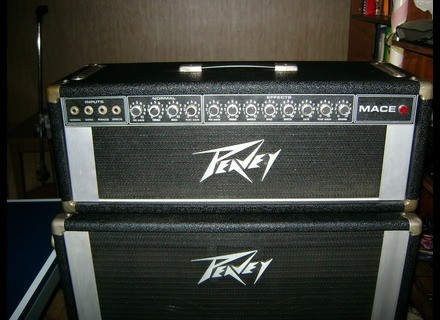 All user reviews for the Peavey Mace

Peavey Mace
3
I put an ad on craig's list for a speaker cab for 2 12's and I didn't care if it had speakers in it or not. I was willing to spend 40 bucks. In a couple of days I get a call and I am told that this guy has a old Peavey Head and cab and I can just have the cab because it doesn't work. I bought it for 40 and took it home. I took the cab and head home. The head said mace vt 160 watts on it and it had 4 6l6 tubes in it. I took the speakers cab a part and the wires where wired wrong and that was easy to fix. I needed 4ohms. The amp head after doing some reading on the internet and discovered that shorting main power tubes is ok as long as you pull them evenly from both sides. When I got it it had them all on one side. Pluged in 73 strat and speaker cab and let her rip. WoWawowowa. I hooked it up to clean channel and used a real 12ax7 stomp box to get the drive I wanted.
Well it won't even come close to my JCM 2000 with 4 greenbacks....But for 40 bucks I can leave this at the studio and save my back for the real thing.