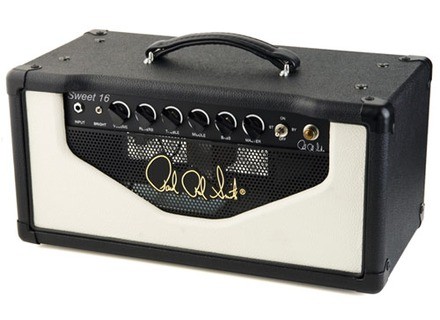 PRS Sweet 16
4
The Sweet 16 is nothing new in terms of the amp world. Just a 16 watt all tube single channel head. You have all the normal controls you would expect. Oh there's a bright switch. But I almost never use it. Overall one of the simplest amps I've had in a while. Kind of refreshing after playing so many channel switchers.

I tour in a soft rock/indie kind of band. Think Snow Patrol meets Coldplay. I needed a lower wattage (yes you read that correct) head for touring. On tour I use this with a Mesa 2x12 cabinet and either a Gibson ES339 or a Fender deluxe tele. Nothing crazy. My pedal board is just a couple overdrives and some delays. I run it really simple.

Obviously this amp like to ride the volume knob. It breaks up pretty darn quick with any guitar. So be ready to use the volume knob to clean it up. I usually put my volume at near noon. It gives you breakup but not a ton so it's alright. If I need to rock out (I rarely do) I just use a Zvex Box of Rock. I really like how well this amp takes effects. It has a pretty clear and transparent voice. Some might say it's a bit trebley but I don't hear that as being a bad thing.

Reliability wise, this thing has been great. Got through 5 months of tour so far off and on. No issues at all, which for me is rare. I have never had any problems with volume, but with today's micing tech it's no wonder. Actually, it's a very loud amp regardless. I have never had to go past noon or so. At higher volumes it does break up way more.

The price is up there for something this small. But the tone is there. I get compliments every night. So I can't complain.
Did you find this review helpful?yesno
»