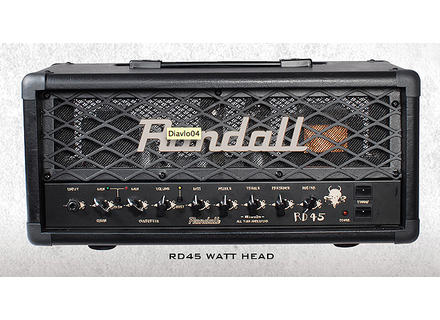 All user reviews for the Randall RD45H

Randall RD45H
4
I’ve owned this amp for about one year. I took it with me on approximately 15 live performances and 2 days in the studio. Plus of course rehearsal, once to twice a week.

Stylewise, I’ve mostly used it for stoner rock, ala Orange Goblin or Down (go have a listen at my own band Goatfather, it can be heard on rhythml guitar tracks), but it can also be used for less distorted sounds and it is excellent for extreme metal.

As a gear addict, I tried many other models before buying this one. I chose it as after my previous amp failed me, I had to replace it on a budget (500€ for an all-tube amp head for stage use, which isn’t bad but not huge either). While it only cost half of what I could spend, 2 things about ut convinced me:
&gt; its impressive headroom, making it a real stompbox platform
&gt; its very reactive and efficient EQ which really allow to carve one’s sound

Hence, it won hands up compared with the Orange TH30 and 5150III, which were the other two on my shortlist.

I got it for 450€ and for the I can’t find anything against it. It’s a reliable amp, well-equipped (fx loop, XLR recording out, 4/8/16 ohm cab outputs, boost, pedal included…). The only thing I could reproach it in the end is that I’m used to more high-end gear (currently an Orange Thunderverb 50 that costs three times as much), and I only bought it waiting to gather enough money for something else. But while I initially thought to keep in only for a few months, its surprising quality allowed me to use it for a whole year – including in a recording studio – without ever regretting it of being disappointed. Hence, I could push back my purchase of a better amp (which allowed me to save even more money, and get even more tinnitus!!!).

In short, I’ve sold it half-heartedly to afford an axe.
Did you find this review helpful?yesno
Cookies help us improve performance, enhance user experience and deliver our services. By using our services, you agree to our use of cookies. Find out more.