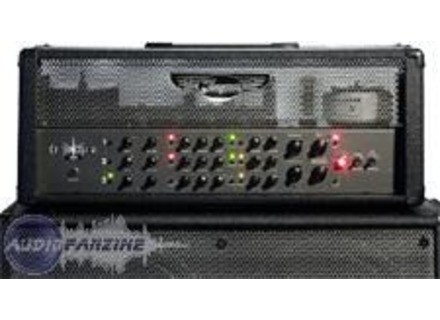 stingray_3440's review"There is not a useful sound this amp is capable of producing. Traynor should be ashamed. "

Traynor YCS100
1
I had a Traynor YCS90 combo. It was just great. So I figured to upgrade to 3 channel head. BIG MISTAKE. There was no sound coming from this amp that was even remotely close to the 90. The clean was dull and lifeless, the middle had terrible break up and the 3rd was a puddle of mud. Just Don't do it.

Traynor YCS100
1
The Traynor YCS100 is the other big high gainer that the company released a while back trying to capture some of the market share for modern amps built by companies like Marshall, Mesa Boogie and Peavey. This particular amp seems to draw heavily from the Mesa Boogie Dual Rectifier for inspiration and certainly has a whole boatload of features to choose from. It's a 100 watt tube head powered by EL34s (switchable down to 30 watts if needed) that has three distinct channels. Each channel has its own distinct EQ section with separate gain, volume, bass, middle, treble, reverb and effects loop volume controls. There are also boost switches and voicing switches on each channel. The clean ones are labeled "modern" and "bright" and the two drive channels have "modern" and "scoop" switches. There's also a master section that has presence, resonance, master boost volume and a master volume as well.

Getting a good sound out of this amp is really not that simple. It has a fairly easy interface to understand despite the many different knobs and settings one could mess with. It definitely sounds cool in theory, but the reality is that I'm just NOT a fan of the tone of the amp as a general rule, so that makes dialing it in really difficult. That being said, some more modern metal type players might appreciate it more than me... but in my experience with the amp I've had a really tough time getting it sound like I wanted. Overall it just seemed to be rather fizzy and loose sounding... kinda like a Dual Recto that didn't quite make it to the starting line. The various voicing switches only made the amp darker, thinner and more fizzy/compressed... not a good sign either.

I've tried this mainly in the situations with its matching Traynor 4x12 with Vintage 30s. Regardless of what I did, I really could not get tones I was happy with. The cleans were boring and dull... no classic sparkle to them really. Turning up the high end to combat the darkness just brought on really shrill high end that wasn't pleasing to me at all. The orange drive channel was the better sounding of the two, but that's not saying much. It had a decent tone without any of those awful voicing switches added in and the mids turned right up. It still sounded a little bit scrappy and loose but I was able to use that in my favour for some particularly raunchy classic and hard rock tones. The third channel was just a joke. Fizzy, compressed, much like listening to a hive of bees buzz around inside an amp chassis. It didn't have any definition and just seemed to get worse as I tried to combat the tones by using the EQ or voicing to change the amp tone.

All in all I wouldn't bother looking at this amp. It's basically trying to be a Dual Rectifier but really doesn't even come close. It has some nice features for sure, and the new price of $1000 is definitely an appealing one, but it really isn't worth that for the sound quality. I really wasn't impressed with this and can't recommend it to anyone unless they simply want a loud tube halfstack and are either running pedals into the clean channel for all their tone, or maybe they play loud punk rock and just need a buzzy sound that kids can jump around to... ah well. I'd stay away from this one...