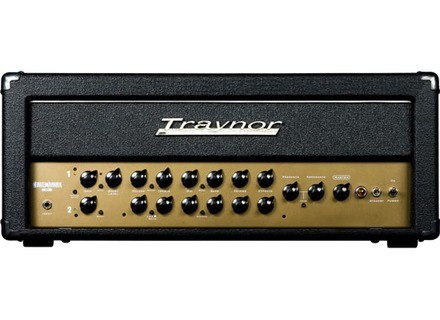 Traynor YCS50H
3
The Traynor YCS50 was introduced by the company within the last few years as an update to their more traditional line of combo amps. It was built to emulate a more British range of tones in a pleasing 50 watt head. The amp features two channels, clean and drive and has a fairly standard control setup overall. Each channel has its own gain, volume, treble, middle, bass, reverb and effects return volume (effects loop) controls. There is also a master presence, resonance and volume control section as well. To cap things off there is a boost section available for the drive channel that allows the user to get a bit more saturation and volume if desired for things like solos. The amp puts out 50 watts of tube power, switchable down to 15 and runs on EL34s as stock.

Getting a good sound out of this amp isn't difficult, but it's not my favourite tone when you dial it in. The controls are pretty intuitive and easy to understand and use which is nice. It's not overly complex like a Boogie or similar amps which is great for not spending endless hours tweaking tones. The two channels have almost identical control layouts, the drive channel being on the top and the clean channel being below that. The only difference between them is the onboard boost section for the drive channel. Upon plugging in, the first reaction I had is that it sounded like your fairly typical 50 watt EL34 powered head. The cleans had a nice shimmer at times but could seem a little flat or bland as well. The drive tones were nice and crunchy, but lacked a little of that booming low end or sizzling high end that I look for in a Marshall style amp.

The amp was auditioned mainly through the matching Traynor 4x12 with Celestion Vintage 30 speakers. It's the type of amp that has very promising features, so I hoped the sound would really blow me away. Well... it's not that the amp sounds BAD or anything, it just really doesn't do anything to sound unique or cool to my ears. The clean tones were pretty average to my ears... they could have a bit of flair at times but on most occasions they ended up just sounding rather generic at best. There wasn't any of that classic Fender woodness or VOX chime. The drive tones were better, and offered some nice classic rock/early metal crunch. However it's not the most high gain amp in the world, so it didn't work for much beyond '80s rock to me. The tones I got from that channel were decent but tended to lack the top end sizzle as well as the huger low end that I look for in EL34 designs nowadays. It ended up sounding like a pretty standard Marshally amp, but without the characteristics that I really look for in such a design.

All in all I think the Traynor YCS50 head is a decent buy for someone on a budget looking for classic British type tones in a convenient package. It's not the most remarkable sounding amp but it gets the job done in a gig or jam scenario. For those who aren't total tone snobs and just want a standard sounding EL34 loaded head with some good features at a fair price this one is worth a look. It's priced well at about $800 new, which is pretty reasonable given the features. It's not something I'd ever look at myself being that it doesn't really fall in the tonal spectrum of what I look for in a British type head, but maybe for others it would work well.