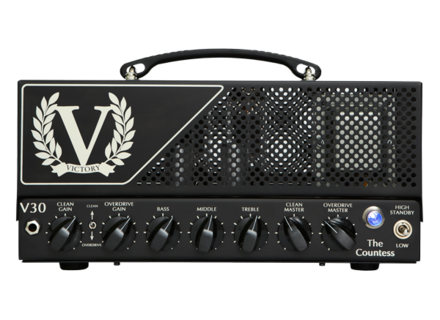 
I had this gem for Christmas in 2015, I’ve use dit quite a lot since then and here are my conclusions :

The amp offers 2 channels with a shared EQ, which is a problem to some users. I play it with an N.O.S. oversized 2x12 cab loaded with V30s with an Ibanez JS2410 and honestly the result is really excellent !
The EQ is very efficient on both channels, which of course will be a problem to some who find a good clean sound that turns out to be too bassy or else in disto, this remains to everyone’s taste but I did find a good, common setting rather quickly.

the clean channel has a very good headroom thanks to the 6L6, a very clear sound that reacts rather well to pedals – I use different dostp/OD pedals depending on my mood and until then everything has been alright.
Even when maximizing the clean channel’s gain the amp doesn”t crunch much.

As for the distortion channel, it’s a real bombshell! Gain at ¼ already goes for AC/DC-like heavy crunches, at half its course allows an easy legato, past the 2/3 mark you get into a metal solo register with sometimes almost too much gain (for my guitar and playing style at least).
In a nutshell, you get an awesome versatility, and what a dynamics! This blow you feel in the low-end even with a 2x12 with a good old power chord! Really excellent, and the distortion is perfectly defined, make a huge chord and you’ll hear each chord resound, which is simply great to hear.

The amp’s power is high enough for any amateur musician stage configuration, they say it’s 30W but the manual rather goes up to around 42W when pushed, with a Variac power system in the front that allows to reduce the power as well as a back switch that allows to use only a single power tube (and you can even choose which, so as not to always use the same). Still, I feel that on distorted sounds, using the Variac feature takes a bit away from the amp’s punch, so I prefer to keep it in full power and turn one tube off.

I also own a Marshall JVM410H Joe Satriani that I also plug into the same N.O.S. cab – or a 4x12, depending on the stage. Frankly, even if I wouldn’t split from my JVM as it remains a superb amp, the Victory is one notch over any other amp I’ve played so far (including the Marshall Satriani) in many fields including build quality, power, sound definition, dynamics and all I’ve mentioned above – exceptions being in terms of versatility and comfort compared with the Marshall Satriani’s 4 channels and integrated noise gate. I still had to add a few pedals to find my settings on this small yet monstrous 2-channel amp but it’s really worth it, as it also provides little to no hum in distortion mode !

Also, both channels react really well to your playing attack and volume knob, resulting in the fact that even with a heavy distortion the result is excellent when you lower the guitar’s volume control. Also, the JS features a Hi-Pass filter which is great for preserving the guitar’s trebles while lowering the volume, keeping a great sustain and a nice sound definition!

In a nutshell, that’s a really great amp – and one with character. I never owned a Cornford but former users from this brand almost all say they can recognize Martin Kidd’s signature. I had hesitated for a while with a Mesa Mark V:25, which is also great but the Victory really blew me away, with a really strong, punchy British character , a price that is really worth paying, 2 excellent channels, 18lbs (8 kg) with an included gigbag, all in all it’s just plain great! Go and get it, pals!
Did you find this review helpful?yesno
»

Published on 04/15/14
The Victory noble family welcomes a new member, for the Earl got married.

View all 3 videos of Victory Amps V30 The Countess »