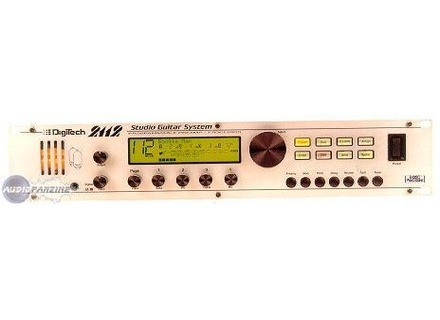 kyleohare's review"If you like Tube Overdrive, and sparkling cleans - this one is for you. "

Does Overdrives, Distortions, EQ, Delay, Reverb, and Stereo (panning) effects as well as a bunch of other stuff like 'Quad Delay', has left/ right amp out mono jacks - and when used between two amps in stereo , does some pretty amazing stuff, like a rotary simulations / phasers and panning delays. Very cool.

Upgraded mine to the 2120 with a really simple EPROM chip swap. Swapped out the stock tubes for Groove Tubes, and went to Ruby Tubes now. Sounds great with pretty much all. It's hard to tell, personally with tube swapping that your tone has changed ' a lot ', it's only a minor change. I think you could even use 12AU7's in here for less distortion , if that's what you were after and 'soften' things up a bit for blues, country, etc...

Even the presets on this thing sound GREAT, and are very useful as a guitar player - and maybe even a Bass player / keyboardist could use one of these to get some really cool stuff. I had a BOSS GT-6, and GT-8 but don't have anything good to say about those. They sound horrid compared to this unit, though it's older than both of those!

Tubes are what make this baby really cook. It's one of the best FX processors I've ever used because it sounds 'analog', and not 'tinny' or 'digital'.

I use the unit for Delay, and most of my distortion tones. I get both a Chandler Tube Driver tone, which I use most of the time for that Pink Floyd / David Gilmour sound. Cleans are AWESOME, and very useful. Quite a few blues tones to play with in there too, and everything is super customizable.

One of my friends is a guitar player, and he ditched his BOSS GT for one as well. He plays metal, and Punk and gets a really authentic Mesa Dual Rectifier tone out of it through his twin after tweaking one of the stock 'mid scooped' distortion settings. He was also a 'purist' before owning one, always ragging on his digital equipment and using mainly analog stuff. Now the pedals are back in their box, and this unit has really simplified his rig setup.

I don't like the 'noise gate' feature, and always turn it off. Distortions are OK, but the Tube sounds / overdrive modes are what really make this guy sound great. I love the Compressor, EQ, and pretty much everything about its sound except for some settings such as the Whammy, (which doesn't sound like the red whammy pedal), noise gate, and some other stuff I don't use. It's packed with features. If you're not getting a good tone out of this unit, yours is either defective or you're tone deaf!

Controls take some time to get used to, and I feel like some of it's features are rather buried. I don't like that aspect of it. That's about it.

The thing I like the least about it? Well, the Wah tone is merely 'OK' , and the Pedal Board (control one) feels cheap and slides around on the floor because its too light if you buy that accessory. I broke quite a few MIDI cables because of that.

I don't like the menus / sub menu crap to get to certain aspects of it because it's very complicated at first. Then I guess you kind of get used to it and it becomes easier to use. Probably one of the main reasons you can still find them used!

I LOVE the sound. That's why I bought it. This thing is super responsive, and I can't see a guitar player not connecting with one and wanting to push it for hours. Lots of guitar player friends of mine have been 'lost in la la land' for hours playing through this thing on my rig.

Nothing, the valve sound is very poor, much better sound from a Marshall amp and the effects, ie wawa chorus etc are also very disappointing.


as said above. The new model is much better, tried it in a shop and found all the sounds to be far superior.


This review was originally published on http://www.musicgearreview.com

DigiTech 2112 Studio Guitar System
4
Bought unit new at Sherman Oaks, CA Guitar Center for approximately $650 some time ago. Purchased on recommendation from recording pro for use in direct recording.

Noise clipping setting on many of the factory preset effects cuts off the ends of notes. Also could be difficult to program for some.

ordinary rack mount effect case with aluminum face and plastic knobs. doubt knobs could handle much abuse. Has worked many hundreds of hours without a glich.

DigiTech 2112 Studio Guitar System
4
This unit has been in my posession for almost ten years now and I don't think I have ever used it to its full potential. I also own the footswitch which integrates very nicely with this unit.
There is a tube and a transistor circuit built in and the effects are mostly digital (with the exception of the analog wah-wah). The 2112 does pretty much have it all and when it came out it was the envy of every guitar player.
You get to choose from a huge selection of distortions, effects and routing possibilites and two separate effect paths allow for seamless switching and morphing between sounds.
There is an instrument input on the front and stereo outputs on the back. You can add a separate effect into the chain if you want to and also connect external controllers.
Effects are being selected by a big knob made out of aluminium...the whole thing is basically built like an amp and it is sad to look at this thing and then consider what Digitech is putting out these days.

This unit is not easy to program. This is not because the menu is complicated - there is just so much you can do with it. The presets want to showcase the distortions a bit too much. I really don't care for them and I would have wished a few more 'basic' presets.
The manual goes into a lot of detail and helps to get to understand this unit.
The information can be easily read on the big display and adjusting the parameters with the knobs feels quite precise.
What I don't like is that this thing doesn't have stereo inputs in the back. So if I want to use it after a stereo delay out of my pedal board I would have to go back to mono and use the input on front. This I never understood - it seems the concept of this unit was to take over all the effects...but with a professional effect like this one I should have the final say about this.

I really like the delays, reverbs and phaser sounds. The chorus is quite good as well. I also like how Digitech doesn't hesitate to dive into complete madness and lets the musician figure out a use for it. I don't use the Whammy anymore but having this effect around is quite nice as well.
I don't like the distortions at all. They always sound much too well behaved. You have the option to send different signals to the stereo output and could create a wall of sound...but for distortions I prefer my beloved pedals. The wah-wah might be analog but that doesn't make it good - it also sounds much too harmless.

As I said - I have been using the 2112 for almost ten years and ever since I got myself a decent amp, delay and a couple of overdrive pedals I have stopped taking it along. You always need a rack to set it up and even though the controller is quite nice I have began to appreciate to actually see what effects I have engaged and what not.
It does have some sweet sounds and that is also why I have been resisting to sell it. I know I will come back to it some day and make more sweet music. It is very unfortunate that these days there are not many manufacturers who dare to build a professional effects processor such as the 2112. Props for TC Electronics...but ouch! They are expensive!
Did you find this review helpful?yesno
»
Read the 7 user reviews on the DigiTech 2112 Studio Guitar System »