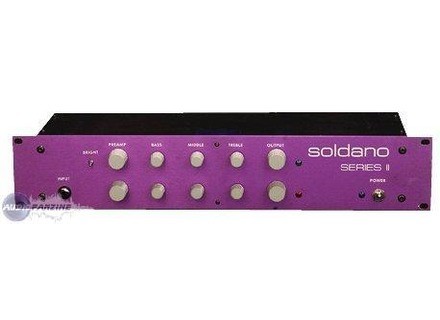 Based on a 12AX7 vacuum tube, a little stiff and dry anyway.

Perfect for rack mount, quiet and precise, but still lacks a bit of personality compared to the Matchless Hot Box or Marshall JMP-1.

Good qualté / price ratio for the Made In USA.
Designed with quality components, this preamp is largely the case with respect to all current chinoiserie ...

very easy to use
mine had pots of "chicken head" like Vox that I recommend to everyone because the originals are unreadable: they are round, and there is no scale on the carcass / knob

Lag Beast and used Gibson Les Paul Studio 89, Marshall EL34 Amp and 2x12 cab with V30 harley benton
Whether bright or saturated (my preference was the saturated, I never saw) are very warm and round.
In saturated, a great soft and silky, never aggressive, impressive. The headroom is not necessarily huge, but well enough to play a little bit of everything, and even Bourin. This softness is very friendly to me and guarantee of quality.
The bright light is the subtle but does the job on a Les Paul for example.

I regrète for not having used the cab mentioned above, which is an excellent rappport money, but ultimately did nothing to do with the mea-sided in my V30 today ... too bad , may be I find her a present for my config .. who knows

It gives me a very good preamp that I had for 2 years
if I listen to recordings made with (I'm an amateur), I always want to buy a ...

As against this, does not have access to thousands of sounds with ... but if you like, it's very good bour price.

Note that I've never played on a Soldano head or combo to compare.

In the days when I had the config preamp-amp-cab, I've owned mesa studio preamp also, carvin quad x and JMP1

The Soldano is unlike any other real

rowerfox's review (This content has been automatically translated from French)

I put like 10 rating because that's exactly what I wanted, it said it might be a little lightweight for other ...

If you speak a little English, you know what it means to "bass", "output", etc..
if you can turn buttons, you're really strong!
if you can press a footswitch, you're a true football player, man!

The simplest use of the Fast Fashion pramplis, need I say more?

pramp this is clearly more rock than metal. the clean is clean and trs trs lens with the "bright". pushing the gain, we get a nice big crunch trs bassy (yeahhhh!).
in distortion, as stated klawny, is not a standard gain (DSOL for trash / death / mtalleux grrrr), but against the grain is particularly frank and fantastic. this stuff sounds really for anyone who stays in mind big rock!

APRS a Triax, then a ada mp1, I quip Soldano (by accident, actually) and frankly sounds good. I use a power amp Soldano SM-100 and the combination of the two is really deadly.

I really wanted a pramp simple and hard at the sound, I had a small budget, and I believe the road to the SP-77. we have husbands and I am not prs divorce. I sell my prfrerais mre plutt my Soldano rack ...

says it all, right?

intotas's review (This content has been automatically translated from French)

Soldano SP-77 Series II (Made in USA)
5
4 12AX7 tubes Ruby
Mono Preamp
No effects loop.
Between 1
1 output
Between a footswitch

Attention this preamp is quite difficult, it is not advisable to add an transisitors power amp, plug in something like facade in Valvestate etc.
He must at all lamp. In the same way it is necessary to be careful with the effects that we will connect behind ...

My config is as follows: SP77, Gmajor TC electronics, 20/20 and Marshall 1922 cabinet of the same brand. I use either a 2 or a Musicman LUKE Peavey Wolfgang.
The clean sound is pretty thin and critallin, trs good like that. the switch is brigth trs effective damage that the channel is not only saturated long ... The crunch channel lgrement from the middle of its travel.
The Distortion channel sounds natural trs, trs "lamp". Nothing do with preamps that derive their saturation diodes or other signal-warming and with two tubes. Here the dynamics are standard and the grain very very precise. The slightest mistake is transcribed. The SP77 works very well with the 20/20. I plugged in a Mesa Boogie 50/50 and your exact n'tait no better, even worse. The sound is very equilibrated. The rglage of mdiums is very effective, you can easily dig the sound (unlike boogies). As a result, all styles are available: the Blues to metal. The mine saturates quite as much as the ADA MP2 I owned before the blast in less grain and more natural to feel the high end. The fact that the sound is slightly hyper precise believe a lack of gain but it's not my opinion ... well for a little trash to him connect a guitar made for a. .. Van halen an example ...
As against the treble is quite fickle, they can be very desageables and make the sound very aggressive, has depended on the day. So do not hesitate readjusted the treble and presence on the power amp to find the sound.
on the other hand I think this preamp lacks a bit thick when playing in the treble.
Musicman has the same one she's fairly accurate I personally prefer to play with my Van Halen seemed to compensate for the lack of thickness in the acute and allowing an easier game.
The sound is better when the rack is plugged into a Marshall 4 * 12 or in my Trace Elliot 4 * 12 for example. I do not even speak the Soldano and other Boogies ... we should try.

I possess over the past ten years, perhaps longer. I alternate between different moods depending on the amp (Mesa Boogie, Trace Elliot Speed ​​Twin). It is a low-end preamp that has great value qualitprix. The type of preamp you buy while waiting to pay the gene must X88R or CAE 3 + Se ...
In this price range, it does not conccurents.

Did you find this review helpful?yesno
»
Read the 7 user reviews on the Soldano SP-77 Series II (Made in USA) »