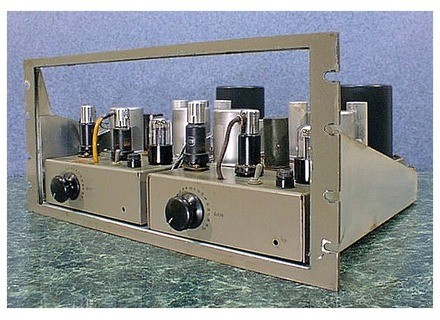 Rca BA-2C
5
The RCA BA-2C is a 1950’s tube microphone preamplifier. I recently had the pleasure of trying out one of the preamps, although it was heavily modded and probably not very much like an original BA-2C. This was the only BA-2C that I’ve used, so I can’t say how this would matched up to the original, but it was undoubtedly better. This new version of the BA-2C had XLR connections and built in power. It wasn’t rack mountable as it comes in it’s own box with the tubes sticking out on the top.

It’s not hard at all to operate the RCA BA-2C as the one I’ve used really just had controls for setting the gain on it. It had built in phantom power, but this was a mod as the original doesn’t have this. There’s not going to be a manual for this, but there’s nothing at all to using it.

This modified version of the RCA BA-2C was hands down the best sounding microphone preamplifier I’ve ever heard. I can’t say exactly what was different about it, but it seemed like the guy who made it turned it into a completely different mic preamp. I tested it out with a Shure SM7 and shot it out with our Neve 8068 console we have at the studio, at this beat it out hands down. It’s one of the fullest and clearest sounding preamps I’ve ever used, but don’t quite expect this from the stock BA-2C…

While you won’t find any out there quite like the one I’ve used, the RCA BA-2C should be a very solid microphone. Perhaps you can find some information on getting yours up to snuff if you’re interested as it seems worth it to upgrade it if you have one or can find one. They’re still not very cheap on their own, but finding one will prove to be the hardest thing of all here as they’re quite old and won’t be available in too many places. If you’re interested in a big (and somewhat expensive) project, find one of these RCA BA-2C’s and do some research on how to modify it and you’ll have yourself an incredible preamp to say the least. Of course this isn’t very much information on how to do so…
Did you find this review helpful?yesno
»