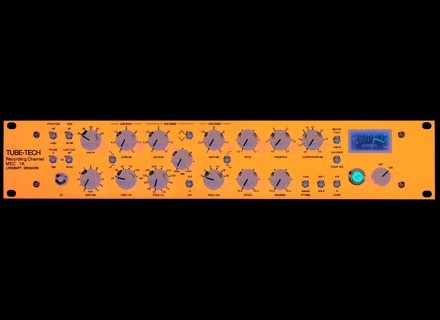 MEC 1A, Tube Pre-amp from Tube-Tech.

View all offers for Tube-Tech MEC 1A »

Tube-Tech MEC 1A
5
This is a recording channel (mic pre, EQ, and compressor) which features all in one. It has a tube based mic pre which gives it a nice warm sound compared to solid state. It also has a ton of controls, not only for the mic pre, but the EQ and compressor as well. This is a really good purchase for a studio engineer who likes to use the EQ and compression during tracking (basically, a really good engineer). This isn't ideal for home studios as it's really expensive.

There's a whole lot going on with this channel strip. Each facet of the strip has a lot of controls. The pre-amp features two input gain knobs (coarse and fine). There is also a phantom power switch, a -20db pad, a phase reverse, and a low cut filter, and a DI input. The EQ has three bands (lo, mid, hi) and has high and low shelving EQ. The mid section has a bell-curve. The compressor has threshold, ratio, attack, and release, as well as output gain controls. There are switches to turn the EQ and compression on or off as well as routing controls.

The sound quality of this entire setup is fantastic. The pre-amp is a great tube device, with a really nice fat warm sound. I can't really complain about this at all. I wouldn't make it the only mic pre in your setup, as a solid-state pre-amp is probably better for certain sounds, but if you need anything to maintain a warmth, this pre is great. Acoustic instruments like guitars and violin are particularly excellent, but overheads, pianos, even some electric guitar sounds are really fantastic with it. Also, the EQ and compression on this are both top-notch. While I was a little disappointed that the EQ had only three bands, I quickly got over it as they can really help shape the sound really well. The compressor is likewise a fantastic compressor, using the tube power to maintain the warmth and thickness of the tone without sacrificing quality or amplifying too much noise.

This is just a really solid channel strip overall. It's expensive but the money is totally justified in this case, as every feature on the unit is awesome. I'd highly recommend this channel strip to a studio owner.