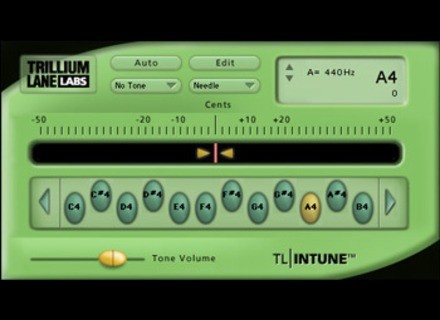 Trillium Lane Labs TL InTune
4
Trillium Lane Labs TL InTune is a simple instrument tuning plug-in that comes in the TL Utilities bundle. It isn't a voice or instrument pitch shifting tuning piece of software like Auto Tune or Melodyne, rather it is for tuning an instrument that you have plugged in to your interface or console going to Pro Tools. I didn't have any issues installing the plug-in or the bundle as a whole, as it only took a minute for the whole process to be completed. The interface does allow for a decent amount of control over your tuner, as you can tune with both the needle, which shows you how far off cents wise you are, and a tone. There aren't really any parameters beyond setting the mode and/or what pitch you want, so I don't think a manual is necessary at all.

I'm currently running Trillium Lane Labs TL InTune on a Mac Book Pro that has a 2.2 Ghz Intel Core 2 Duo processor and 4 GB of RAM. I run it in Pro Tools LE 7.4 that runs with a Digi 002R or a Digidesign Micro Box, depending on where I am. I haven't had an issues whatsoever running the plug-in within this configuration, but I've also never had it on more than one track at a time. Having said this, I don't think that too many users will be putting this on more than one track either, so as long as you have a system where you can currently run some plug-ins on without a problem, I think you'll be fine with this one.

It is always a good idea to have a software plug-in available like the Trillium Lane Labs TL InTune, but I must say that I only use this when I don't really have any other options. While it is pretty easy to use, the tracking isn't as good as I wish it was. It will do the job when you need it to though, especially if you're just playing a tone from it to tune. I'd recommend checking out the TL Utilities bundle to see if TL Metro and TL Master Meter (the other plug-ins in the bundle) are something you might want, as you can only get these plug-ins in the bundle...
Did you find this review helpful?yesno
»