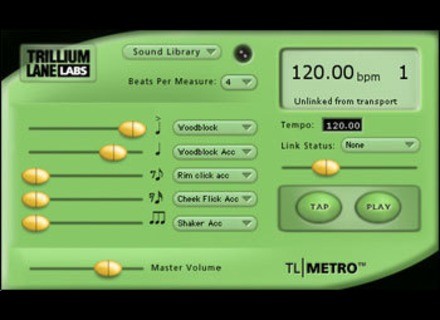 Trillium Lane Labs TL Metro
4
Trillium Lane Labs TL Metro is a simple metronome plug-in, which comes with the TL Utilities bundle for Pro Tools. It was quick and easy to install as it only took a minute, and the interface took even quicker to figure out, as it is straight forward and easy to read. It gives you access to controlling the tempo, the type of click sound, the type of accenting (if any), a tap tempo, and an overall master volume control. I think that most users will be able to use it right off the bat without an assistance or the help of a manual.

I am currently running the Trillium Lane Labs TL Metro on a Mac Book Pro that has a 2.2 Ghz Intel Core 2 Duo processor and 4 GB of RAM. I run the plug-in in Pro Tools LE 7.4 that I use with a Digi 002R audio interface. When I use TL Metro, I throw it on an auxiliary channel and bus it to whoever might need to hear it or to separate track. Sometimes I'll even record it down to an audio track if I want to. I can't say that I've ever had a problem running the plug-in within my configuration, but I only use one at a time of course, which is what I'm assuming other people will be doing - I can't imagine anyone needing two instances of a metronome in one session!

As far as the way it sounds, the Trillium Lane Labs TL Metro will get the job done more times than not because of the good amount of control that you have over what it can do. However, most of the time I just end up using the metronome in Pro Tools as it I do find it slightly easier to set and use, even if it may not have as many parameters to work with. If you need a metronome plug-in for your DAW, I'd tell you to also check out the other plug-ins in the TL Utilities bundle as I believe that the only way to get TL Metro is if you buy it in the bundle. It is a very cheap bundle that is worth checking out as you never know when you'll need a different kind of metronome!
Did you find this review helpful?yesno
»