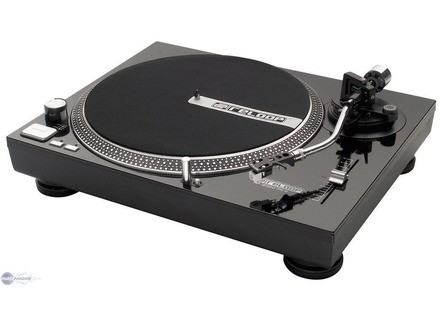 Average Score:3.3( 3.3/5 based on 7 reviews )
Value For Money : Excellent
Not satisfied with those reviews?
Our members also liked:

They are my first turntables, which I bought together with a Reloop rmx 30 (3-channel) DJ mixer.

The pros:
I find this turntable very nice, people often tell me "it looks really hot!"
As a first turntable (even if I haven't used any others), I find them very good for beginners!
The power of the motor is enough to take your first steps, as well as the cartridge included by Reloop.
If you are not very demanding, the 10% pitch is more than enough.

The cons:
They are easily noticed after a couple of months of intensive use (specially for a beginner), and after having tried other, more powerful brands and models.
The pitch became a bit softer and less precise.
You can also notice that the motor is very light in comparison to those of higher-quality turntables (tested with different numark, stanton, technics, and other reloop models).
The system that serves to support the tonearm didn't last more than 3 months.
You need to change the cartridge included very quickly!

Value for money:
$570 for both. After having used them very regularly, also outdoors, played by me and several others during several hours (10h without interruption): It can handle rough play very well! Not with the same punch as in the beginning, obviously! But nothing too annoying. I think I will keep them a year or so.

Based on my experience, I wouldn't buy them again, but I recommend them to all beginners!
But since I now have more experience with mixing, it's only natural that I aim for a higher-end product.
Did you find this review helpful?yesno

9 photos
100% analog turntable MADE IN CHINA , broke down finally . Engine has no power at first ...pitch and speed circuit board does not respond correctly after 5 years
Did you find this review helpful?yesno

Reloop RP-2000 MK3
3
How long have you been using it?
I've been using this turntable for three months

Did you try any of other models before buying this one?
Gemini pt 2100

Which feature do you like the most / the least?
The least: Soft motor toque, lack of tonearm height adjustment

The most: The looks of the turntable

How would you rate its value for money?
For its price, I recommend it to beginners

Based on your experience, would you buy this product again? ...
Based on my experience, I would've kept my Gemini PT 2100, it's a good turntable.
Did you find this review helpful?yesno

Reloop RP-2000 MK3
I've been using this turntable for three months, but it's secondhand, so it's actually 5 months old. What I like best about it is its price, the motor is not very powerful, but it's enough to mix, the +10/-10 pitch is also more than enough. What I like least is that there is a slight difference in speed between the rp2000 and the rp4000! I think it is a very good value for money! Based on my experience, I prefer Technics!

It's almost a year since I have it. I still haven't had a problem with it. But I find the pitch lacks some precision. So I downgrade it from 9 to 8.
Did you find this review helpful?yesno

Reloop RP-2000 MK3
How long have you been using it? Some time
What do you like the best? The top of the deck, same as technics but the finish is not as good
What do you like the least? It lacks precision
Did you test other models before? Yes, I've been 15 years at it: Thorens, technics sl 1200 (I have 2), sl 1500, sanyo tp1000 the whole reloop range (or almost), numark bof, bst beark, the others aren't worth it.
Value for money? It has nothing to do with Bst nor technics, I think it's average. The 2000 doesn't have a super torque, it's not the same motor as on a technics. On the other hand, the 5 and 6000 don't offer much to complain about, the finish is good and the product can stand up to the technics.
The 2000 is great if you buy it secondhand, I bought two for $240, if you can get four, you should go for it.
To be honest, technics is better, but the reloop are well manufactured. The 2000 Mk3 seems simple but I have managed to mix for quite some time with only a very slight lack of precision in comparison to the technics mk2, but, truly speaking, they are very similar. Besides it weighs almost 22lbs, so it is very stable.
2 technics 1200 mk2 and 2 reloop 2000 mk3, it's more than enough for some fun, and at your place it's cool. You always need to keep your turntables well-adjusted and have needles that can hold up, but I know people who have technics in a lousy condition with crappy needles. I can strike a balance between the two brands.
Would I buy it again? Certainly. Mine are secondhand and, to be honest, they are in better condition than certain technics sold secondhand (bent tonearm, wobbly, etc., etc.)
technics yes, legendary but very expensive. I got fed up 20 years ago, in 1990 when I had some Technics, from the slp 1200 series (a gift) and 2 integrated circuits broke down, and they were not cheap so it's not very reassuring. When I see the Sl 1200 1210, etc. they are OK, but their price is shameful. It's good that Reloop dumps on them, the Numark are catastrophic, I tested 5 different one ...
Did you find this review helpful?yesno

Reloop RP-2000 MK3
I've used this turntable for a month and haven't had a single problem with it.
Its value for money is very good, given its features (powerful motor, soft torque).
It's obviously not aimed at a professional DJ, but it's interesting for a beginner.
Everybody says reloop is a lousy brand, time will tell.
Did you find this review helpful?yesno

Gabiche's review (This content has been automatically translated from French)

His'm three months I have but it is a product of the second hand, so it 5 months, personally, I mix house / techno / trance and it suits me very very good! Very good report quality price, I can advise you to mix, scratch for many moin ...
Did you find this review helpful?yesno
Cookies help us improve performance, enhance user experience and deliver our services. By using our services, you agree to our use of cookies. Find out more.