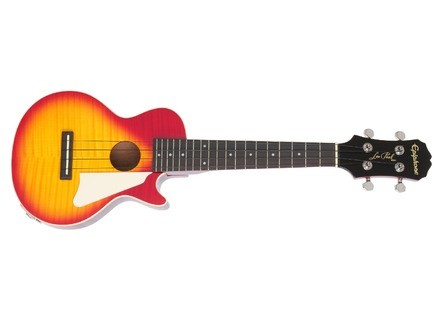 Anonymous 's review"If you only get one Ukulele..."

Epiphone Les Paul Ukulele
5
This could be a contender.
It's well made, very good when amplified and a pleasure to play at any time; it also doesn't break the bank

Gibson no longer make Ukuleles...
Apart from the fact that Gibson own Epiphone and Epiphone make this particular model of Ukulele.

Also as Gibson own Epiphone and this is an Epiphone it means this is a real Les Paul rather than just a Les Paul shape. It even says Les Paul on the headstock.

The Epiphone Les Paul comes in two finishes, the Vintage Sunburst, like mine, and the Cherry Sunburst, (when this model was introduced it came with a 3 colour sunburst for both finishes but in 2013 they changed this to a less impressive - to my eye - 2 colour sunburst)

The Ukulele itself is very solidly built, (in Indonesia). It feels like you could club baby seals to death with it and then still knock out a tune. The downside of this solidity is it has a very thick sound board and this coupled with the fact it has quite a thin body means it's not very loud acoustically, you can of course put it through an amplifier though and it does do very well when amplified It's also worth changing the strings to get the best out of the sound and I have gone low G with it now which gives it a slightly more Guitar like feel. One thing though, It may say Les Paul, it may even look like a Les Paul but it sounds like a Ukulele.

(And if anyone wants to be clever, remember Les Paul did own a number of Ukuleles, he did play them and he was part of Gibson tech team when they made the ETU3 Electric Tenor Ukulele in the late 40's)

This is such a cool ukulele! The very idea of taking a Les Paul guitar ethos, Gibson's most venerated design ever, and applying it to a ukulele...well, to be frank it's ludicrous, but in a very fun way! I'm glad to see a ukulele with a cutaway, a uke with a AAA flame maple top, and a uke with a good sunburst finish. One doesn't typically find these kinds of appointments on a ukulele, but this one has all of them. It plays very smoothly, with no extra effort to fret each string.

This is a decent-sounding ukulele, but I've heard better, to be honest. Lanakai and Cordoba are a couple of modern brands that I've tried around this price point, and I liked their sound better. The cutaway is a cool feature for playability, but I think the smaller body shape as a result tones down the volume one can achieve with this. Also, the built in piezo pickup is very quacky sounding - it reminds me of the piezo system sound from early 90s guitars - that is to say, unrealistic and plinky sounding.

Overall, this isn't bad. This is a like a main practice uke, or a ukulele gift for a person who has a Les Paul as their primary instrument. I wouldn't use it for a real "serious" singer-songwriter or folk gig. It is a touch gimmicky, but it will put a smile on anyone's face. But it's certainly worth a look, for sure.
Did you find this review helpful?yesno
»

Epiphone Les Paul Ukulele
4
The Epiphone Les Paul Ukulele is something that showed up locally at Long and McQuade and when they took it out of the box, I was laughing. It looks just like a cherry sunburst Les Paul (complete with faux pickguard) but it's a little ukulele! It even has a faux flame top and the Epiphone headstock that's featured on the real Epi LP Standard. That would be cool enough on its own... but I should also mention that it has an onboard pickup. That's right... you can plug this thing in and wail on it into a distorted Marshall! They're made in China and come with a gigbag as well. It's a full bodied ukulele with a sound hole, so it's basically like an acoustic-electric instrument.

The design isn't exactly what I'd call ergonomic. It's fairly small and light, and certainly has better upper fret access than most ukuleles, but it's still not stellar. That being said, for what it is it's got more than enough. I had more trouble getting my fingers to fit on the frets than I did with upper fret access anyway so c'est la vie. It's a light instrument too which is nice, but it has enough density to not feel like a cheap plastic toy.

Getting a good sound out of this ukulele is what it is... you plug in and that's your sound. There are no controls to adjust the EQ or even the volume of the pickup, so you're at the mercy of the amp to dial in the tones you're using.

There's really not much to describe soundwise. It's not an instrument that was meant to ever be plugged into an electric amp (especially with distortion applied) so what sounds I did hear were basically a novelty. However, I had loads of fun turning to a high gain setting on the amplifier and just trying to do my best Yngwie or Slash impression on the thing. Fortunately it doesn't tend to feed back much, so that's a good sign. The pickup is decent on it too, it has a nice clear sound that belies its cheap price tag.

When they first showed me this little thing, I assumed it was a toy and that it probably wouldn't play or sound all that great. However I was mistaken. This, though it is a novelty in essence, is still a fully functional uke with an onboard pickup... plus it just happens to look like a Les Paul! For the $140 new they cost, it's worth having around just to use as a party favour... who knows.
Did you find this review helpful?yesno
»