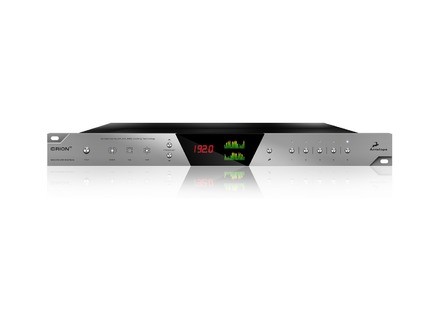 All user reviews for the Antelope Audio Orion 32

Average Score:4.7( 4.7/5 based on 3 reviews )
Not satisfied with those reviews?
Our members also liked:
Editorial review
Users reviews

Antelope Audio Orion 32
5
It provides 32 sub D AD and DA conversion channels at 96K, beyond 96 you get 24 channels on a mac and 32 on a PC. 16 Adat I/Os, 32 I/O channels at 96K, 64 madi channels at 44 or 48K, and Spdif I/O.
It is connected via Usb to my IMac OSX Mavericks (the Antelope tech advised me to wait before upgrading to Yosemite in order for them to finish all compatibility tests) as AD/DA and I had no problems during installation, no latency problems nor crackles either.
Everything works fine up to this day.

How long have you been using the product?
I've been using it since November.

Did you try any other models before buying it?
I used SSL before and even my wife, who knows nothing about music, noted the difference before and after. I have also used apogee, avid, digidesign, and motu systems.

Which feature do you like the most / the least?
It's revolutionary! Everything is clearer and more precise (the lows are less muddy and take the space you assign to them, the mid and high frequencies are more precise and with more presence, better defined in space, effects included). I rediscover my mixes with every listen. I gained breadth, some details are more upfront, I gained stability, the reputation of Antelope clocks takes on its full meaning and I haven't had any latency nor crackling issues with DP8.
The only drawback is the loss of channels, from 32 to 24 on Mac via USB, when you go from 96k to more than 96k.

Based on your experience, would you buy this product again?
Yes, I'd buy it again without hesitation!
Did you find this review helpful?yesno

How long have you been using the product? 1 month
Did you try any other models before buying this one? Pro-tools HD accel 96 i/o
Which feature do you like the most / the least? The quality of the converters, well beyond Avid products, there is simply no comparison, and they are proportionally much less expensive!
The only pain is the USB connection, because it's unstable and noisy, it's a real pain with PT HD 10! On the other hand, it's awesome with an RMe HDSPe card via Madi! The clock is also very good!

How would you rate its value for money? Jaw-dropping!

No problems since Antelope improved the drivers...But they are very responsive, the guys from Antelope even called me when I had issues to find a solution!
Did you find this review helpful?yesno

How long have you been using the product? A few days
Which feature do you like the most / the least?
The most: 32 conversion channels
The high quality, you can easily compare it to the aurora.
Great clock.
Remarkable after-sale service!!! I opened a ticket due to some issues during installation and two minutes later a guy from tech support called me to help me find a solution.

The least: It's a nightmare to install it via usb on a mac running osx 10.6.8.
You are forced to have an internet connection to activate the online warranty, at the risk of not being able to get the unit running under any circumstances...It simply gets blocked. When I saw that the installation on my mac was blocked, I had to install it on another computer (an old PC) to activate the license. I then connected it again to my mac and everything worked fine.
But apparently Antelope is already working on the problem.

- You must use a short USB cable (3 ft max, like the one included), because I tested with a longer cable and had crackles, as if the clock wasn't synced or maybe some buffer noise.

- And the stability of the drivers with protools 10: Continuous CPU overload, 1024 max buffer size, the Orion gets unresponsive (you need to disconnect it and reconnect it) etc., etc...
I think the upcoming drivers will solve the problems, but in the meantime, it's a nightmare.


Did you try any other models before buying this one? Yes: RME, mytek, aurora

How would you rate its value for money? Very good

Based on your experience, would you buy this product again? YES, given the conversion quality, which I think is between the aurora and the mytek, but you get 32 AD/DA channels, it's incredible!!!
However, I'll need to get a madi pcie card to bring the latency down and have a stable system.

I'll give it a better mark once Antelope has solved the small problems detected.
Did you find this review helpful?yesno
Cookies help us improve performance, enhance user experience and deliver our services. By using our services, you agree to our use of cookies. Find out more.