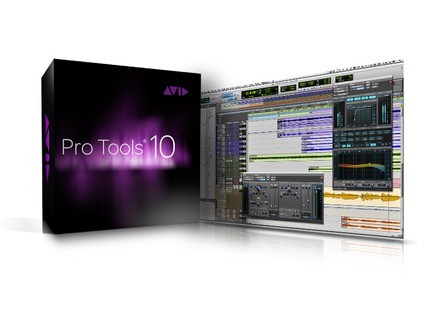 Published on 09/17/15
When you're editing in Pro Tools, whether it's Pro Tools 12 or an older version, you won't get far if you don't understand how the edit modes and the main editing tools work. In this video we'll expl…

Pjones9's review"Good upgrade, but too expensive for the features you get."

Avid Pro Tools 10
5
Simply put, Pro Tools is a must have for any serious music producer or/and audio engineer. It has been the standard software for audio productions around the world for more than a decade now. It's compatible with Windows XP, Mac Os,and many more, so compatibility issues are practically inexistent. The manual is detailed and straightforward, it comes with detailed description on the specifications and usage.
You can make any kind of music with Pro Tools, and it includes a useful selection of virtual instruments plus more than 60 effect processors. It also has good MIDI and notation-editing features. Edition is simple and fast thanks to the Grid, Slip, Spot and shuffle edition modes. New features not included in previous Pro Tools versions:

-Track counts have been upped for v10, which will play back up to 96 tracks at 44.1/48kHz and can record up to 32 tracks simultaneously.
-64 virtual instrument tracks, 512 MIDI tracks, 160 aux tracks, 256 busses and one video track.
-Clip Gain: Every clip has its own gain fader and the waveform will look bigger or smaller when you raise or lower the gain, which is great visual feedback.
-It also runs faster than the previous versions; sessions open faster, fades are calculated in real time and general work flow runs smoother.
This all new features may seem impressive, however Pro Tools 10 is not much of an upgrade, and some new features for this DAW were included before in other DAWs. I feel that for the price you're paying, the upgrade for this version is not really worth the fee. However don't get me wrong, Pro Tools is still a really useful and valuable DAW , easy to use, reliable (at least more than many other DAW's out there, like Logic, which crashes all the time) and has great compatibility with external hardware. This upgrade would be more suitable for experienced producers who always need to work faster. But if you have the previous Pro Tools version I'd say you should buy one of the next upgrades which will have probably more valuable features for the price.

The software is stable and runs smoothly. It runs faster than previous Pro Tools versions, edition is simpler and the Clip Gain feature is useful as well. I used to work with Logic Pro, which is also easy to use but incredibly unstable, there were compatibility issues with hardware all the time; it would not recognize the audio interface sometimes and crashes are recurrent. With Pro Tools I never had this problem and it's very hard to mess up a session; thanks to multiple features it feels very nice to always have a backup of your audio files, no way that cool improvised solo is getting deleted accidentally! In Logic is very easy to delete files without noticing, but in Pro Tools there are several ways to make a reliable backup easily, like the options Save Session as, Session Template, etc. I used this software for about two years and was happy with it. But the upgrades are much better.

What I liked the most was the Clip Gain feature, having each clip with its own gain fader and the waveform looking bigger or smaller when the gain is raised or lowered is really useful and saves you a lot of time. What I like the most about Pro Tools is the easiness of the edition and mixing, if you get the grid of it (which is fairly easy to get if you read the manual) you will be recording and working with audio smoothly and effectively. It's not for nothing that the majority of professional studios (if not all) use Pro Tools as their main DAW. What I liked the least is the price! I think it's pretty expensive for an upgrade that has features that other DAWs had long before. But anyway, it makes my job easier and that's the point. However if I had to choose again I'd buy one of the next upgrade versions Avid offers. It's much more worth the price, because more 'big' features are added and overall quality is improved. Sound definition and quality are always guaranteed with Pro Tools. In conclusion:
Pros
-New features: clip gain. 64 virtual instrument tracks, 512 MIDI tracks, 160 aux tracks, 256 busses and one video track.
-Better sound quality
-Faster and more responsive
-Supports more file formats

Cons
-Overpriced
-Not 64-bit
-Few upgrades for the price you pay.
Did you find this review helpful?yesno
»

Avid Pro Tools 10
5
The program works on any platform either Windows XP, Windows Seven or MAC OS , so I haven't had any kind of compatibility issues.

The manual included with the DAw is great , Avid made a great book explaining how the program works , how it's made and the usual functions and basics of it.

The typical functions are easy to spot trough a great designed interface with a lot of chapters and topics to choose from.

The common installation of the system requires a while, but except for that, it's primary and very straight-forwarding.

The application performs very constant and Pro , as you would expect from Avid.

The gear is extremely stable and it works without any problems or errors.

I'm getting high performances with this Daw , mainly because of how powerful are the build in processes , how advanced are the synths , how good the piano roll is and many other cool features.

What I like most about it, It's the stability of the daw and the excellent interface offered by Avid.
I like the piano roll window , I like the notation windows a lot , this Daw feels more like you make music than others do.

Without a question, one of the most high-quality Daw's that I ever experienced and the perfection and deficiency of any crashes makes it better.

I tried many and many Daw's but Pro tools designed by Avid is something quite new even now, the excellent build-in results, those elegant converters , high-quality reverbs, and many other functions make this one of the most used Daw in our time.

After getting to know the system quite detailed, I would make the same choice and purchase Pro Tools by Avid, basically because of the interface , stability , power and great notation tools.
Did you find this review helpful?yesno
»

Avid Pro Tools 10
5
Pro Tools 10 is a must have for any serious musician or artist looking to get the best possible sound while working with an industry standard DAW. Pro Tools 10 has 96 tracks and comes with 50 plus plug –ins and effects. It can be used on your Mac or a PC if your computer meets the requirements. The best part about buying this DAW is that if you already own a previous version of it you don’t have to pay full price which is 700 dollars. You can upgrade for about 300 dollars.

Installing it was quicker than I expected, but if you are a first time Pro Tools 10 user it will take you some time to get the hang of it. It can be very complicated and overwhelming at first because it is so in depth and so different than any other DAW that is available. Pro Tools 10 will run good on your computer, I have never experienced any crashes or freezes. It is a rather big program though so you will need to have enough hard drive space to have it and plenty of CPU to run all of the plug-ins.

Using Pro Tools 10 will keep you in the loop with almost every studio across the world. All major studios use Pro Tools to record with and master songs. So it will make it easy to take your songs from your computer to a major studio and back by just using the PTF files. I am happy that I chose to upgrade to Pro Tools 10 by Avid. I look forward to learning more and more by using Pro Tools 10. There are just so many things you can learn, even though I have been using it for a long time. I feel like I still learn something new every single time that I work with a song in Pro Tools 10.
Did you find this review helpful?yesno
»

Avid Pro Tools 10
5
Pro Tools is one of the most well-known daw’s right now, it’s being used by many well-known performers and manufacturers.
It’s fairly complicated regarding the equipment that are build-in and the whole aspect of the software.
The manual of the program is quite clear and sufficient to get a nice understanding how to software works.
The general setup of the program takes a while, but except for that, it's basic and very straight-forwarding.

The software works very stable and Pro.
The gear configuration is well made and I haven't seen any bugs regarding the audio processing.
I been using it for a year now, and I gotta admit that the notation features, the great audio effects and midi are very handy regarding the mixing process and mastering.
Pro tools new engine has 48-bit fixed point arithmetic and the new compressors make a huge difference concerning the quality of sounds.

What I like most about it, It's the stability and the great interface provided by Avid.
It's one of the most expensive Daw's on the market right now, however if you own the money, you should try it out and enjoy the whole process regarding mixing and mastering.

Without a doubt, one of the most high-quality Daw's that I ever encountered and the precision and lack of bugs makes it even greater.

I tried many and many Daw's but Pro tools developed by Avid is something pretty new even now, the great build-in effects, those fancy compressors , high-quality reverbs, and many other features make Pro Tools stay on top.

After getting to know the program pretty in depth, I would make the same choice and order Pro Tools by Avid, simply because of it's stability, great interface, and those Pro features provided by it that make a huge difference in your mixing.

Did you find this review helpful?yesno
»
Read the 31 user reviews on the Avid Pro Tools 10 »

Published on 01/28/13
Avid and Abbey Road Studios are looking for three songs or tracks, as chosen by industry hitmakers, to get mixed and mastered at Abbey Road.