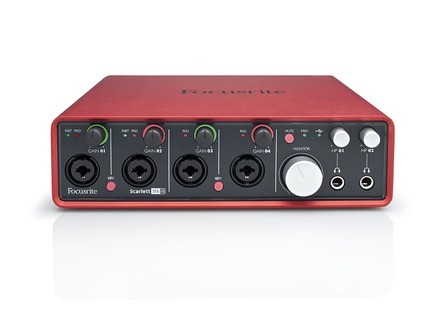 Scarlett 18i8, USB audio interface from Focusrite in the Scarlett series.

Product replaced by the Focusrite Scarlett2 18i8.

All user reviews for the Focusrite Scarlett 18i8

Average Score:5.0( 5/5 based on 2 reviews )
Value For Money : Excellent
Not satisfied with those reviews?
Our members also liked:

Focusrite Scarlett 18i8
5
- Which technical specifications motivated your choice?
I bought it a week ago to replace an M-Audio mobilepre soundcard, which was awful (latency, crackles and big incompatibility problems). I had the need of several mic inputs, 4 are enough, especially since you can add more thanks to the ADAT output of the soundcard

- Do you use it with other instruments or systems and what's your setup?
Connected via USB. I plug a bunch of instruments, as well as mics and midi.

- What do you use it for?
I use it on my own for now, so track per track. However, I bought it because I wanted to be able to record a band.

- Are the drivers stable?
Very stable, no complaints.

- How many tracks can you record/playback simultaneously?
For the time being I only record track per track, so no comments.

- What's the latency of your system?
Around 7ms.

- Did you have any problems during the installation?
You register the product on Focusrite's website, download the driver, connect the soundcard and that's it. I didn't need to read the manual (which can be downloaded from the website). So the installation is relatively simple.

- Did you have any incompatibility problems?
I had one problem: If you turn off the soundcard while the DAW is still open, you'll get a blue screen of death. But once you know that, you just have to pay attention.

- Is the user's manual clear and comprehensive?
I haven't opened it, but if you need it, you can download it from Focusrite's website (very handy if you lose all the documentation, like I did).

- Did you try any other models before buying it?
I had an M-Audio mobilepre which was terrible — it's like night and day!

- Which feature do you like the most / the least?
The most: The number of inputs, the quality of the preamp, the design (it is very nice), and the ease of use.
The least: The blue screen of death if you unplug it from the PC while the DAW is open. Other than that, nothing.

- How would you rate its value for money?
Very good, for the price I find the sound very good. The number of inputs is enough, it fulfills its role fine. Good value for money.

- Based on your experience, would you buy this product again?
Even if my experience with this soundcard is limited, I would buy it again without hesitation!
Did you find this review helpful?yesno

Everything seems to work just fine. I downloaded the most recent drivers. I bought it yesterday to replace a layla 24/96, whose driver don't quite follow the evolution of the system.
4 to 5 ms of latency.
I have already done a couple of recordings and haven't had a single problem yet during recording or playback.
Aside from that, I had an issue with cubase and the "monitoring direct" option, which remained grayed out while an echo disrupted the recording, so I had to deactivate the tracks' bus. Nothing unsurmountable, but I contacted support about it.

No issues during installation, you only need to follow the instructions.
Pretty easy

I bought it yesterday
I found no review
Different discussions led me to choose this soundcard
It's pretty solid, it doesn't give any problems
The preamps don't have too much gain, but it's enough
A nice idea: Instead of a VUmeter, it's the LEDs around the controls that illuminate (green-orange-red)
The mixing console is quite comprehensive, but I haven't really dived into it.

Its value for money seems unbeatable:
However, I would've loved an ambiance simulation for the mix, like on most other soundcards (the saphirre pro 24 DSP's VRM)

A drawback for mobility fans (which isn't my case): It can't be USB powered, only via an external PSU.
I will update my review once I have more experience with it.
Did you find this review helpful?yesno
Cookies help us improve performance, enhance user experience and deliver our services. By using our services, you agree to our use of cookies. Find out more.