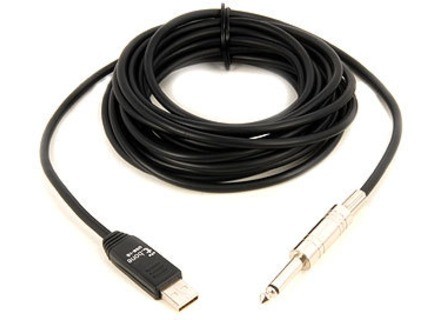 The T.bone USB-1G
3
Cable Jack / USB 5 meters to plug his guitar on his computer, a blue LED that is useless. I use it on a PC with Windows 7 and it works very well (although the record does not indicate compatibility with Windows 7, I tell you it works without problem, unlike the IK Stealth Plug), no need to installation, and with Asio drivers there is no latency. Duration of installation 2 minutes flat. I use Guitar Rig 4.

Works well with Guitar Rig 4 asio4all and drivers. No latency but the crackling amp simulations with distortion. It's less embarrassing on the cleans. I did some tests and recording with Audacity is good, except some crackling that I largely removes the background noise suppressor. It's better than the jack into the sound card is already something.

Plug and play setup with no problem. Configuration as the recording device is a bit tedious.

I received it today, bought on Thomann. I almost bought the IK Stealth Plug which integrates software but not compatible with Windows 7 and expensive, the Alesis and Behringer guitar link GuitarLink are its real competitors, but cost 40 euros against 15 euros for the T-bone. And it's really the same thing so the choice is quickly made. Only fault the lack of software but if you already have is perfect. Content of this purchase allows me to play and train on mp3 with guitar rig, while having a quality of his drinking. Although for the record too.

Edict of July 5, 2010: I bought a Pod Studio GX and there is a real difference and upgrade its ease of use, not to mention the bundled software ... but obviously this is not the same price.
Did you find this review helpful?yesno
»

Other The T.bone uSB audio interfaces