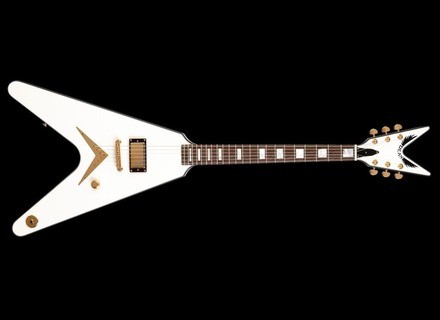 Dean Guitars V 79
5
Dean guitars was started in the mid 70s buy a guy named Dean Zelinsky. They are known for their radical shapes. Dean had the idea that the more spread out the wood on your guitar is the better it would sound. They are also known for their V profile necks. The V profile necks fit the radical motif of having radical shapes on their guitars. The V is up there with the ML for most common Dean model. The 79 V model is based off of the specs of what the V would have been in 1979. The guitar has a mahogany body and a flamed maple top. It has a mahogany neck with set neck construction. The neck is the Gibson scale lenght. It has a 22 fret rosewood fretboard with jumbo frets. This model was a stop tail and it had a tune-o-matic bridge and a string through stop tail piece similar to that of a 58 or 59 model flying v. It comes with two Dean pickups and each one has its own volume knob along with a master tone knob. There is a 3 way toggle switch to switch between the pickups with. On top of the radical headstock there are grover tuners.

The V design provides great upper fret access naturally. The set neck design means there is a bit of a heel at the neck joint but on this model it is not bad. The V shape might be hard for some people to play sitting down. You may have to play in a classical position with the guitar in your lap if you are playing while sitting down. Some models have a strip of rubber to add more traction to the bottom of the guitar, making it easier to play while sitting down. Standing up the shape gives the guitar perfect balance. The input jack is kind of in a bad place if you are use to wrapping it through your guitar strap.

The maple top adds some crispness to the chunk of the mahogany body. The stock pickups are pretty hot but they are not that great. The neck pickup you can kinda get the smooth neck pickup lead tone but it gets really muddy really fast. With the bridge position you get nice grit going but it can also get muddy. This is a problem with cheap high output pickups they tend to muddy up the sound quickly. If you want to really open this guitar up you can throw in some Dimarzios or Seymour Duncans like an sh1 sh4 set or something.

Not many people play Deans anymore. They have radical looks and people who like them tend to really like Deans. They are good guitars overall. The quality on these made in Korea models is pretty good. They say Korea is the new Japan and I guess that is true. If you are looking for a flying V thats something different and a bit cheaper than a Gibson this Dean is a good option.
Did you find this review helpful?yesno
»

metalexophobie's review (This content has been automatically translated from French)

Dean Guitars V 79
5
DEAN V This is a skyscraper that looks American, but American sound that is made if I remember correctly in Asia, but do not leave right away, the rest promises to be good! !
cords leave the body of the beast, a bridge from this retro boomerang-shaped, higher on the stick to hit a block is found Gibsonian cute little
pearly fairly standard points on a rose wood table type, average after all ... after the bridge blank (plastic) we find that the charm dee this guitar head, V also it fits perfectly with the body and home 6 Grover who until now are very effective and are well agreement, and then the little logo that kills ....
In terms of settings, there is no Ches MusicMan "Luke" or IBANEZ "jem" three good knobs Volumeaigu / Volume Bass / tone, but are sensitive enough sound really changes from 0 to 10
a small three-position selector white will change your sound harmoniously hu hu!

The handle is quite a gréable, there slips out easily, the handling is quick and pleasant as mentioned above is strongly influenced resst GIBSON (for the record, Dean was in the 70's reproductions of Gibson guitars, for where the influence!) but it's great! a small dot even when fishing CCAA is acute, in effect ctte beautiful damsel to 22 frets on a desagremment Notter has access to it because the designers, to make the guitar balanced have encroached on
the space for the fingers in dudos of the instrument to put the fate Bitonio
hanging strap so the gutar hero is not at the top for you! you feel good with this instrument, it is very light, is in place, you would not have the old head that looks like on other guitars of the same price, but it is big enough so the game itself c ' is not a problem, but for a small zicos it can be a bit large (dime bag at the same time that was not a giant scratch untilisait of the same proportions)!
The sound is very fast, we are surprised by the power of the machine, you do not Doutt it is all in the belly, in the second quelues goes from thrash metal to the most virulent dirty blues from the depths of bayous ....

I scratch to be a core group Thrash death to the old hairy hints of hardcore and stoner puride blackisant like a SUPER JOINT RITUAL mix of DILINGER ESCAPE PLAN would have flirted with MACHINE HEAD before a concert deMOTORHEAD, while outside a car passes listening to the MAIDEN HELLOWEEN or .... and as a practitioner of the gibson for about 10 years, I was only surpassed by the + V DEAN, she sound, dress and the look that suits me, happy happy!
more to honor him, I accompany my peavey 5150 and a good old 4 / 12 MARSHALL: lamp and vintage .... and therefore in this configuration, it is in the metal fatty donf (a donf) that oozes from everywhere, that is hot, but whiskey mode rhythm (light from 5150 and yes ...) with the selector the micro scratches on serious is the heat, you want to jazz blues: true!
small snag, though micro powerful as any lack some clarity, and this is where Gibson gets his crown but it is 4000 balls + (€ 550 for youth) and that it counts ...
wholes sounds of this creature I meet;

After two months of regular use (again, concerts), I am very happy with my Acquisition, because for ages I wanted a flyning, but the gibson V were expensive and not very aesthetic, the Epiphone Same (although the Gothic Jackson's too ...), Dave Mustaine and surprise, a registered qqs forgotten for years back to haunt me, and hop love at first sight. that's life. and then mess it's really cheap, the price of a Epihnone except that it sounds better and is more original, but it's hard to find and yes, but good people in the distro back in France (eh Gillou!) ah yeah mine I bought new for 560 € and it is even not very expensive for the quality of the object.
- With experience, you do again this choice? ... A donf! Had I known, I would not scratch that 2 months in their fly! brief will be no fear, it's a cheap scraper disappointed that you said!

ps; attention to color and scratch my table and all those in this category, not like in the picture (vertical wood grain and brown) but like this:

trenos's review (This content has been automatically translated from French)

Dean Guitars V 79
5
The Dean V79 guitar is really good, A for Oueil you would think it is really heavy but it is not dutout assait lgre so assait practice to jump all over scne, even when the handle is SONC trs long but enjoyable to play over parcontre be careful because my smaller rope (10 Ernie ball) tends to get stuck in the 2nd frte the top of the handle (but also good for you really caught the scratch so its like a brute but not often it happens is going to do ke five months I use it is happened once or 2 times

Use a level no dir frankly I highly recommend (when you who read this notice and who does not know how to scratch j'tait like you then I came across this guitar and I fell in love) a its incroillable for the price it costs, the head is a bit big compared to the rest does not matter but it gives a style (and it is by this that when we r in menmerde I hit with pte), micro sound good trs Calita three volume knob 2 (1 for each pickup) + 1 tone

A warm spell this dir guitar over the sound is amazing!

For those that want to see it all on the site of my group
http://www.narkor.fr.st
Did you find this review helpful?yesno
»

zangdar555's review (This content has been automatically translated from French)

Honestly, I'm more a fan of Korean manufacturing this range of guitar.

For the 690th (with deluxe case Dean), wonderful finishes, guitar very "consistent". Mics Dean works great (with a specific precision amplifier .... For my Engl Fireball), a slight touch of fat that makes the sound more body, but not messy (perfect for any type of metal, we stop saying anything), ideal for playing: Pantera, Hatesphere, Lamb of God, Gojira, etc..
For his surgery, put a Dimarzio Dropsonic and Meshuggah hop direction.

Clear sounds very soft and warm intermediate position, wide range sound thanks to the volume knobs for each microphone. But this is not what we request this guitar ...

In short, with an amp that buggers and precise, it's perfect.

Weight honest, there is a very comfortable standing, the guitar is perfectly balanced. Mechanically good, that I will replace anyway by AD when the finances will follow. But the bends on the G string (be damned) would like very much.

An excellent value for money, sounds surprisingly powerful and accurate (but not to excess) in distortion, perfect for any type of metal.

The perfect guitar by changing the mechanical (haggling) with AD, be the 70th over.

The Korean guitars this price range do not really ashamed to face certain U.S. for half the price ...