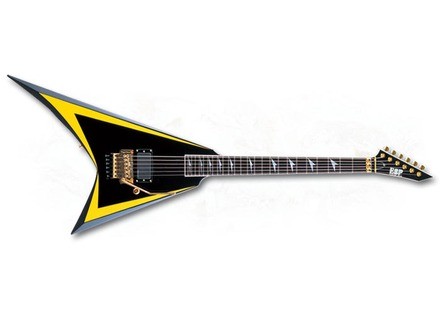 tjon901's review"Alexi ESP with the paintjob of his old Jackson"

ESP Alexi Arrow Head
4
Alexi Laiho is a well known guitarist nowadays. He is the frontman of the popular band Children of Bodom. Back in the day before the band was huge he was known for playing his custom Jacksons. After those guitars were stolen he switched to ESP guitars because they said they could replace his stolen guitars very quickly. So now there are ESP guitars with a similar design to his old Jackson. Since they are ESP's the shape is slightly different. This guitar is the closest ESP made to what his old Jackson looked like. It is the ESP Alexi Laiho Arrowhead. It has a black finish with Alexis Signature Yellow stripes which his Jackson had. This guitar is a super simple guitar. It has an alder body in the offset V shape. It has neck through construction with a maple neck and an ebony fretboard. The fretboard has 24 jumbo frets with the new arrowhead inlays. The Electronics are typical to what Alexi uses but they are by no means normal. Alexi uses passive EMG's. The model he prefers is a single EMG Hz-H4 with a single volume control. It has a locking nut up top and an original Floyd Rose down at the bottom to finish it off.

The offset V shape is a pretty comfortable shaple and it balances well. The fret access is not that great even with the extra cutaway bit on this guitar. The body angle is not great for upper fret access. On these full ESP models the back of the neck is unfinished which is great. It is like a bolt on guitar but with the heel less feel of a neckthrough which it is. The Original Floyd Rose is one of the best tremolo systems around and stays in tune. The jumbo frets and ebony fretboard give a smooth feel and let you get a nice smooth action.

I am not the biggest fan of Alexis tone and this primarly comes from his choice of pickups. The passive EMG's are super weak. This is a passive copy of the EMG 81. It has all the high end of the 81 without the fullness of the active version. So these pickups are pretty harsh sounding. This is even worse if you get this model with the gain boost. I dont know why someone would run a passive EMG with an active gain boost. If you are going to do that just run active EMG's and be done with it. The gain boost is like having a tube screamer or something built in to your guitar and this matched up with these pickups can produce some pretty ear splitting tones. Some people like this though. If you can get this guitar to sound muddy you have accomplished quite a feat.

Its a shame Alexi had to switch to ESP. His Jackson guitars were iconic and super popular. Now you can get a model just like what Alexi use to play from Jackson but he doesnt seem to be switching anytime soon. If you are a big Alexi fan you now have choices. If you are a newer fan you probably know him more for his ESP but old school fans that love the Jackson can now get it in the form of the Jackson RR24. So depending on your tastes you can either get this or that both are good guitars but I would give the edge to the Jackson since it has a compound radius fretboard and a fully active EMG 81 instead of a passive 81 copy like the ESP has.
Did you find this review helpful?yesno
»