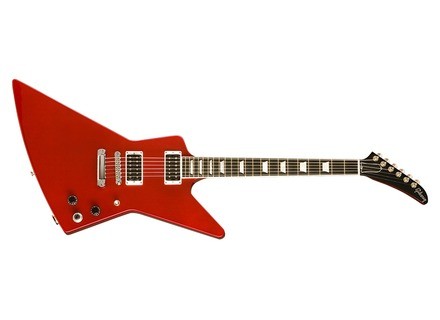 Korneo's review (This content has been automatically translated from French)

Gibson Robot Explorer
5
Made In USA Gibson Explorer comes in a white case Made in Canada.
Mahogany body, set neck mahogany with ebony button 22 frets and pearl trapezoid inlays and white lisséré.
Pickups 496R and 500T at the bridge to the neck.
System Tune-o-Matic. Mechanical robot quite impressive.
2 volume, 1 tone, which is also used for the robot system.
Transparent red color in the sun we would really love apple, is superb.

Noted the Neutrik locking input jack is a little more great.
The assembly is of impeccable quality.

I put 9 because the varnish on the back of the neck hangs a lot at first. I do not know if it&#39;s my sweat that has overcome the fact that it hangs but it does more.
I also put 9 because I susi found in the excrement to a foot or ask the guitar, in fact, the mechanics are big and touches the wall I stand on one foot and the ground as the "Cuyl" of the guitar is not right, it&#39;s slippery ...

I am a big metalhead who likes big rock sounds, I wanted the best of two worlds, BISAR jen e have not found it, I found better!.
The handle is large enough, standard size for Gibson.
Access to treble is good despite some minor problems for past passages played only in the smallest ratings of the handle. This is not an evil, c&#39;esrt ine the shape of the guitar so no problem.
It weighs his weight but it&#39;s not so annoying.

The robot system is really nice, the tone is pulled, it moves to the letter agree with the tuning chosen, no press the button and it plays the same way when we play normally and everything is done all alone and very quickly.
There is a possibility given his guitar in:
- Standard
- Drop D
- Less than a semitone
- DADGAD
- Delta Blues
- Double Drop D

And I forget, it is also possible to create its tunings and save them.
There is also a function that adjusts intonation intonation without tuner, right through to led the robot button and a screwdriver. It&#39;s not ultra convenient when you have a good tuner, but it&#39;s a good idea to have thought!
There is a function of winding strings and désenroulage for changing strings. it only remains to secure the ropes comem a mechanical locking PRS (From above) and it went away. It is also possible to do with strings strings for those who asked the question.
The tuning is adjusted so that the tuning to go faster or slower. To slowest, the guitar fits to 0.2 percentage points, ie, very accurate!

Nothing to say about this system in operation but I have a bad point for Gibson I explain below.

Let&#39;s be clear, I bought it for his muscular type of Airborne, the 1st Metalica and all these kinds there but much + jouflu and powerful.
With this guitar, I found exactly what I wanted!

At the store, I tested it on a Blackstar HT-5 and the care was bleuffant! I simultaneously test the Robot Flying V on the same amp withthe same régalges es and a 2-minute difference, it was not all the same thing.
She did not have that sitting in the low and the punch to explore. In addition, the sound was loud with the Flying, something that is not explored at all. The sound I really parraissait égrelet with V.

Since then, I play on my 6505, on a 5150 III, a Line 6 HD 147, a Mesa Dual Recitifer, a Mesa Recto-verb, Marshall Kerry King ...
She still has that dynamic dehorning beef and a sound that is we want to play for hours.
I compared it to the Flying V Robot Flying V has a normal ten Lespaul a reissue Explorer ... It has always been better and its owner was green to see the sound of this guitar.

I use it 3-4 hours a day for almost a month and I can not get enough!
I always search the Explorer, but I found that standard models are not top top level quality and finish and then I came across this one that my SURT directly made love.

With experience, I would do this election for sure!

WARNING: I do not put 10 in the overall guitar because I was enormously disappointed that Gibson on one point.
I mexplique I bought the guitar at 4am to drive home for a sum bonen anyway and I have a m&#39;atendais quo ila charged, the seller told me he is everything inside and a simpel alim Boss pedal type is used for recharging. Okay.
A few days after I try to recharge the batteries as was almost empty.
I plug everything as it should and nothing, guitar empties its battery is charging and does absolutely not.
After 10 hours of buggery and shot dozens of calls to the store where I bought it, I dempande seller a transformer which uses it. Convinced that I was a bad bad mood manipulation and help, I had not thought of that detail.
Indeed, nowhere is it mentioned that the transformer must be 600mA LOW. Knowing that a Boss is 200 mA, I could always wait.
So travel speed in several stores to find a universal power supply with enough of my (not so easy to find) and I arrive at D *** y and I find one to 1200mA. € 30 + the price of the guitar ...
I rnetre home, branch and zero problems, the skyscraper was charged as a big.

So bullet points for Gibson who speaks nowhere in the manual (sixty page anyway ... And all in English!) To be such a transformer.
In addition, their online manual is translated into French BISARRE, it is not at all saying the same thing as the English one, it must have been mistranslated.

Except this time-cons, it&#39;s a great guitar!