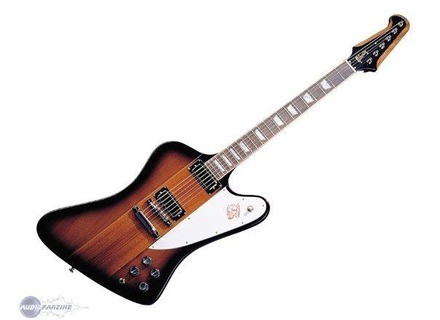 Gibson Firebird V
4
USA made. Mahagony body and rosewood fingerboard. Crazy tuners. 4 control setup. Typical firebird pickups. It's a fairly stripped down guitar. The scale I believe is Fender instead of the shorter length you usually see on gibsons. For such a pricey guitar it's not a massive feature set but on the other hand these are not the most popular guitars. Seems like they don't make very many.

Some people say these are awkward to play. I can see how some would say that and I think it's because the longer scale length kind of throws some guys. Personally I'm used to the length so I'm right at home playing this guitar. The body shape is pretty comfortable and kind of reminds me of an SG in a lot of ways. All things considered it's an ergonomic design despite what the wacky lack might make you think. Fret access is great. Knobs feel pretty solid. These are definitely well made unlike a few models that Gibson makes which are know to have QC issues. Maybe I just got a good one.

Here's my gripe with these. The pickups on them sound nothing like actual vintage Firebird pickups. I have played a couple original Firebirds and the pickups they put on this reissue model are way too hot and not EQ'd right. They're very muddy and don't have that high treble the old ones do. I realize it's hard to recreate a pickup perfectly, but saying that the reissue doesn't get close is putting it nicely. The new ones sound more like P90 single coils than anything. The original sounded more like a ticked off telecaster. That said, they aren't bad pickups. But if you want the original sound you'll have to shell out the extra $200 or so for a repro set. A guitar that costs this much should not need an upgrade like that however.

I'm impressed with everything but the pickups. Actually this is a really nice reissue despite being a bit hard to find sometimes. Like I said before, I have seen and played a few original ones and this remake does do the design justice. If you are more concerned with getting the look down, this will be a satisfying axe, but if you want accurate sound and looks, expect a pickup switch.

Gibson Firebird V
4
The Gibson Firebird was a guitar that was designed by the company in the early sixties to compete with the flashier Fenders of the time. Gibson was losing sales with the Les Paul, and the Flying V and Explorer of the late fifties didn't fair so well, so Gibson opted to bring in famed auto designer Ray Dietrich to design a line of guitars to be named the Firebird. This particular guitar was in the top part of the line and this reissue features the following specs. It has a mahogany neckthrough design that goes through the whole guitar. There are mahogany wings on either side of the center block to give the guitar its really unique swerving contours. The fretboard is rosewood and has 22 frets and trapazoid inlays. The tuners are the same models that are used on Steinberger guitars, which is a cool and unique touch. It features a typical tune-o-matic bridge and stopbar tailpiece and the pickups are a pair of Gibson mini humbuckers wired to a typical Les Paul/SG style control layout. Like all Gibson guitars it's built proudly in the USA.

The Firebird V is definitely one of Gibson's more ergonomic guitars overall. Though it's a little bit on the bigger side size wise, it definitely sits on the body well and the weight is lighter than say, a Les Paul. It's definitely got a cool feel to it that reminds me of a shrunken Explorer meets SG. The upper fret access is excellent overall too.

Getting a good tone out of this guitar is pretty simple. It's laid out like a Gibson and the tones are that familiar mahogany sensation but with a certain spunkiness that reminds me of a Fender type instrument too. Very cool.

The Firebird has a really cool and diverse set of tones that are a great blend of classic thick Gibson textures mixed with the bright and jangly Fender textures. The mini humbuckers have a really cool and unique set of tones that don't have the low end heft of humbuckers. The cleaner tones are great for funk and country type textures (IE: more of a Fender territory) but with that classic Gibson low end lurking in the background. The drive tones are pretty cool as well. The pickups have an open and airy quality with overdrive that works perfectly for classic rock rhythms or some sustained lead tones. It doesn't quite have the tightness factor for things like modern metal, but for a more vintage looser voice it's definitely got that vibe down pat.

All in all I think the Gibson Firebird V is a really interesting and cool option for someone who wants a Gibson that has a unique and cool look to it and does a bit more of the jangly thing that Fenders specialize in. At about $1,475 new they are decently priced for what you get, and they're available in a few different colours too, which is nice.
Did you find this review helpful?yesno
»

Gibson Firebird V
5
It's an old rve, a Firebird, mine I purchase 'is a MODEL amricain trs trs beautiful, which never leaves anyone indifferent , although sometimes people m'aient said seeing her, "Oh, the beautiful Explorer". These are two small hills that are humbucking top, which makes it less versatile type and a Les Paul, for example. Flip-O-Matic Tuno traditional and electronic and available knobs identical to the SG and other Les Paul. The handle now: It is special because one pice of his head to the end of the body, making it quite heavy and the guitar dsquilibre (See Ergonomics). Trs is enjoyable to play, but if you want a notice of "pro", ask Gregzen a member here is a trs good guitarist with whom I played for 15 years and who knows all my guitars.

As I said, the handle is enjoyable to play, getting started is easy, it is not large and trs suits me perfectly. It twirls, and we end up at 22 box without realizing it. The remarkable point of this guitar is its usability: As I said above, it is made from one pice and dsquilibre the guitar: When you play up and we lche the strap, the bte falls down in a clockwise direction (viewed from the front). And yes, do you realize, the ct round is heavier than the body ct!. However, the design of the body enables the forearm scratches arise with comfort and molleux rtable and effortlessly balance.

I'm a fan of Led Zep, Alice Cooper era and the first Thin Lizzy album, for the main, so you see what kind of sounds I like: From subtle crunch, the powerful but flexible saturated, what the vintage! The trick is that the microphones and the structure of this unconventional guitar make it less versatile than another, and it takes a minimum of good quality stuff to make it sound. On my Valvestate 8040 is lightweight lightweight by pramp against a 'lights on the same amp sounds better dja. I found the sound I needed by connecting a twin via a pramp Lag Spitfire, and adcoiffe! The micro needle is ... AIG no doubt, even strident, the sibilants are easy to obtain, the bass is warmer, "fltquot, a Les Paul. In its clear this is a pure micro Fortunately, arpges are fluid and dtach.

I use this scratch since 2000 I think I love it all. It is a beautiful object in addition to being a fucking scratch, the handle and the head gives a long strange impression when playing standing to be very small, like when John Entwistle played with his low fMeasure (Peace's me). Sure, it's boring story of dsquilibre when stoops to rgler his pedals or even just a rglage amp, one has to keep constantly lest the head of stick beat up on the floor. Overall it gives me great satisfaction, the sound, the fact of playing with a little instrument rpandu, gnral in the mouth. No doubt I have no regrets, and if I find a Firebird White Cream with 3 microphones ...

leandros83's review (This content has been automatically translated from French)

The access to acute and very good as a SG.
Guitar and slight RAPORT by other gibson.
The sound and the one between a les paul and an sg. the regal.

Is suitable for rock, blues, jazz.
I play with an old head JMP 1978 and the sound and extras. I'm a fan of M and it was the sound it makes in those with ca firebird.

I use it for 4 years and is happy.
value for price for a gibson HOnet

Did you find this review helpful?yesno
»
Read the 5 user reviews on the Gibson Firebird V »