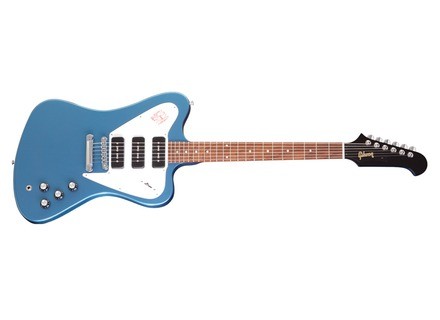 Ja-Noh's review (This content has been automatically translated from French)" the best of two worlds?"

Gibson 2011 Firebird Studio Non-Reverse
5
Reprint of an original model of the 60s The apparent wood grain under the sunburst is superb.

The handle is it enjoyable?
The highlight of this guitar. Super comfortable in your hand. It goes without the acute problem. We must play for hours without getting tired hand.
No imbalance despite a long head. Mechanical easy to reach (on top). It is large enough. Proper weight.

The "fat Gibson" and "clarity Fenderienne" met in a guitar that is possible? Yes (it's not a sampler either) but the spirit of the two is there. Well raucous P90, will develop their full with a good overdrive and clear with the 3 pickups and a 5-way switch found sounds and familiar combinations.
Why Gibson complicated life with the combination of circuits? It changes the sound a bit but it does not add much. The phase inversion, it is very useful to bring the dynamic has a good rhythm.

I have long tried with a friend. One of the most interesting Gibson reissues.
A great look, a great range of sound, just sounds a bit more gadget. A model has discovered, in my opinion and that unusual.
With more vibrato to accentuate the vintage spirit, it was flawless.

Fred The Shred's review (This content has been automatically translated from French)" An original Gibson !!!"

The pickups are coil tapped P-90, that is to say we can the "spliter" via simple push pull on the volume knobs. there is a general tone and a 5-way switch like a strat. A push-pull on the tone knob can reverse the phase of the micro environment.
So there are a million combination of micro, in theory ... I mean in theory ... We are really at the crossroads of Fender / Gibson paths.

The handle is top, varnish glides well in hand, there is no binding and the frets are perfectly adjusted and limées.La fingerboard is maple toast, caramel color, it is quite beautiful to the eye, it rub a little under the fingers, less fat than rosewood, can be a bit softer than ebony ... for her I would not know what to say ... it approximates a good shot of lemon oil does not hurt though!
The frets are fairly thin for a gibson smells inspiration fender with maple fingerboard. Mechanical take the deal, but are not very precise tuning and are too close to each other suddenly we are all the time about to move in both if you have big fingers!

Access to acute is perfect, the guitar is balanced despite its asymmetrical shape, the handle does not look forward as opposed to a Reverse firebird. The finishes are really good, the paint is the beautiful blue Pelham is a kind of blue / gray metallic electric slightly which reveals the grain of the wood, gorgeous!
It weighs his weight between a Strat and a Les Paul, but as the body is fine enough it feels pas.Les plastics are good quality and fit properly (this is far from always the case on recent gibsons. ..)
frankly it's mouth! And an original alternative to the same old Telecaster, Les Paul, Strat, etc.

So the sound, there's good and less good ...
The P-90 sound good, velvety and clear at the same time, a lot of output level for a driver amplifier and the guitar has its own sound, well on bluesy solos and well on crystalline arpeggios.
The difference in tone between the three microphones and sharp enough to be interesting and the 5-position allows a truly varied range.
Good split the coil tapped, it's not bad, actually it amounts to lower the microphone volume without loss in the high one gets invariably on a classical guitar. on the other hand it does not add much in the intermediate positions of the 5 position ... phase inversion on the microphone will be much more radical milieu associated with the neck pickup or bridge, but not so usable in my opinion .. .

Good on the other hand I do not know what they fucking guys gibson wiring, but there must board its electronic BTS every knob to 0 there's a buzz of sick and problems with earth loops , once you remove the hand of the bridge and strings, it buzzes all the way! A quick inspection of the cavity containing the knobs on the back of the guitar confirms my suspicions: no shielding of the cavity, cheap cables and knobs to China ... can do better! The tone knob is correct the other not, they have the game on their axis, etc.
To end on electronics, I do not like the 3 volumes, it's too painful and annoying to manage in the heat of the moment and the knob "bell" are not easy to take to operate the puhpulls.
To sum up, will have to get out the soldering iron and nickel after it will be ...

I've had two weeks, and I'm already attached to me, it sounds great without being plugged in, the violin is nice, it is easy to play and has style!

After this is a guitar that will not fit in all the world, it is very airy, so for the metal that will not do, but it is a killer for the bluesy rock, funk, see picking and country ( arpeggios sound really great).

For the price it is consistent, it is a beautiful guitar.

I recently tried a reverse firebird (slightly more expensive), and it has nothing to do, they really are very different guitars! So I do not know if I can do my main guitar, but I think I'll keep a long time in my collection because it is really beautiful and as soon as I misses the flight case, I can not m prevent from sticking 4 chords! And now look anyway!

skippy72's review (This content has been automatically translated from French)" That's good!"

Gibson 2011 Firebird Studio Non-Reverse
5
The 2011 GIBSON Firebird Studio Non-Reverse is inspired by the famous Non-Reverse Firebird III 1965-1969, there pictures of Brian Jones with the same, I say inspired because it is not a replica, in fact it lost and won three vibrato P90 and a rather interesting electronic consists of three microphones Coil Tapped P-90 (Alnico V) offering two tones as they are pulling or pushing (push-pull in good French).

Body and mahogany neck, nitrocellulose finish, I Sunburst model, superb.
The neck 22 frets (medium jumbo) is very nice, quite late (for the amazing Gibson famous for its logs). The big news is the key in Maple roasted ("Baked" or "Roasted Maple") according to the Gibson website: "Maple therefore focused during a specific time at a very high temperature (200-300 ° F); changed its structure and becomes very robust and stable, and gives strong similarities to the acoustic Ebony (its color resembles Pau Ferro), "we do not know much else on that, how it will age? In any case, under the fingers, this is a treat.
It is very well balanced, the weight is ok, a little cumbersome cons, I have not been able to find a soft case to its size, so I moved the box, and there is heavy!

Technically micro Split Coil P-90 is a single coil P-90 so vintage Alnico V "approximately 7.0k ohm in the neck position and 8.6k ohm & central to the bridge" (Gibson), a portion of the winding can be disabled with the push-pull knob corresponding volume. So ca is closer to a shiny simple, the volume is lower but the sound is thinner, tighter. With the same push-pull system tone button is used to switch the microphone from the environment in phase opposition with that of the handle or the bridge. Lot of sonic possibilities.
On my Laney VC15 I can spend good fat P90 sounds more Fenderiennes no expectation of slamming anyway. For the moment I have 2 favorite positions the bridge pickup to send heavy and intermediate position with the neck-middle split for rhythmic antiphase with the well for funk.
By ca buzzes against not bad, it's normal it's P90, it seems. But when you see pictures of the electronic era models included an outright cavities metal bowl as a shield ...

I did not pay me to such a model one day and here I am with. Good for Gibson out and historical models by adapting new opportunities and without a custom shop price. Anyway I love it, I can do without!

Most the look
Value for money
handle
sounds
The - no shielding cavity
And to nitpick: the mushroom buttons do not offer a good grip to pull them.

Published on 07/15/11
Gibson USA introduces the Firebird Studio Non-Reverse, a guitar designed to have the style and flair of the original 1965-69 non-reverse-bodied Firebird III.