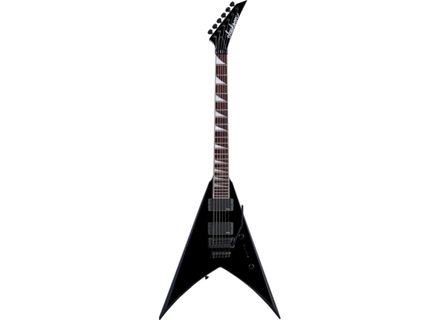 Handle end (thickness) but not too narrow (width), good spacing between the strings, perfect for little hands with big fingers! Very easy to play, fast, almost flat (light radius)
Access to acute is bluffing with the handle stuck.
Case 23 and 24 a little less easy but I quibble.

The guitar does not sting the nose to play sitting must put shoulder. She is not heavy even after several hours of rehearsal. The biggest flaw of this guitar is the pickup selector access to the general bar Floyd. It is really painful!
For those who (like me) change microphones three times solo ben good luck!

Metal guitar to play metal (but not only ...)
81 the clear sound is a little short in mid and low but once you put the distortion phew! Its very accurate saturated, it does not bleed it's very powerful short it sends!
The 85 is quite versatile. Clear sound pretty cool as long away ropes. With distortion, its precise and well rounded, solo it works wonders.
This guitar can be quite versatile (staying still in the hard rock) provided to play the volume knob. I play Marshall superbass 100 W 1969 without saturated, so all the pedals channel.
Tested on Mesa Boogie correct on saturated fat sound too but I prefer my Marshall channel.

I use it for a month 3 hours per day it may seem short to judge but we feel at once that this guitar is born.
Floyd does not tune at all even being violent. A view over time.
I like its look and its handle its fat. A metalheads can not be disappointed with this guitar.
It's not perfect but honestly guitar at this price I did not expect such quality.

The neck is quite thin in width and is relatively large. Suddenly, gripping the guitar is pretty easy. It was already set when I bought it, I had to finesse the settings when I changed the pull of the strings.
In terms of ergonomics, it is a flying V, so it is not what is best, but this is not why we bought it!
I found a hack when I play sitting: the horn go down behind his right calf, now the guitar balanced on his right thigh. If it not bother playing with the handle a little higher than usual, this is a good way to play seated. Access to acute is ultra easy, due to the design of the machine.
The guitar is quite thick, but not as heavy as a Les Paul. I love that sustain vacuum is obtained.
In terms of sound, EMG us out wholesale. By lowering the 85 (side handle), you can almost have a little jazzy sound I kiffe in clear and beautiful in saturated lead sounds. The 81 faithful to itself, is incisive and specific desire with an amp with distortion not resolved completely.

Playing 95% of the metal, the last 5% being a bit edgy rock, the King V is perfect for my style of play As written above, it still has a range of its relatively "large." The EMG 81 delivers clear sound a bit poor in the low range (normal), reserving most games in crunch or distortion. Next round, the 85 is pretty cool when you belittle a little, slightly increases to sustain and sounds become more singing. In clean, with a Fender amp guy, you can get a pretty nice jazzy sound, and distortion sounds pleasant and leads agreements bold.
Living in Paris, I use it mainly with Amplitube 3, and more specifically the emulation of 5150, which gives trachants sounds good, and clean with a Fender (remember the ref ').

Purchased in July 2012, I must admit not having released for at least a month and a half!
The day I bought it, I tried in the same series, Soloist of the same color. For a little less than 100 € more, the King V was worth the shot in terms of electronic (Duncan Design on Soloist) and the handle was a little harder to play on the Soloist.
I loved the color that I was immediately drawn to the electronics (I am a regular EMG, it avoided me to re-invest in a set of microphones) and the violin, which for the price is very successful ! I do not know many models that offer 500 balls through a handle.
After sitting for play, this is not what is best, but with the trick described above, it is still viable.
The value for money is (almost) unbeatable in this range and I am fully satisfied with what I get.
I would do this choice without worries, perhaps without Floyd Rose, which is not transcendent. Good scratching midrange if like the look!