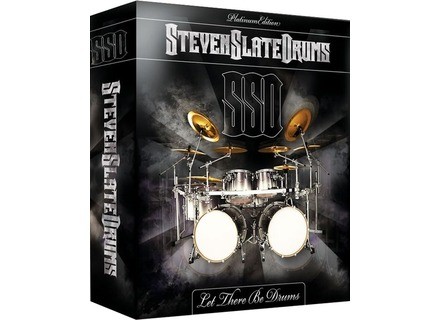 All user reviews for the Steven Slate Drums Platinum Edition 3.5

I have a Mac Pro 2.66 Quad Core with 8 GB of ram and a White Macbook with Intel Core 2 Duo Cpu with 4 GB of Ram.
I’ve used it extensively both in 32 and 64 bit modes, and triggered with both midi keyboards, drum pads and Electronic Drum Kits (Roland TD-6)

The installation is really easy and the the manual is clear and precise.

I’ve used Steven Slate drums for years now, in conjunction with Superior Drummer and Addictive Drums.
Of the 3, this library is the most “processed” and you will need small or no amount of compression and EQ to let it sound perfect in your mix.

I’ve used it mainly as a support for Superior Drummer 2 (mainly kicks and snares).
Don’t get me wrong, these samples are fantastic, but on their own they can sound quite unnatural.
However mixed lower, the results are radio ready.

The only negative thing on this product is the fact that you have to run Kontakt to load these files, and that they don’t have “dry unprocessed” samples.
But I’ve heard that the guys are near to releasing a new version of the software with a proper own interface, and unprocessed sounds.

Overall, if you are lucky to catch a “no brainer deal” at a really low price, and if you are into modern rock/metal this is a must buy!