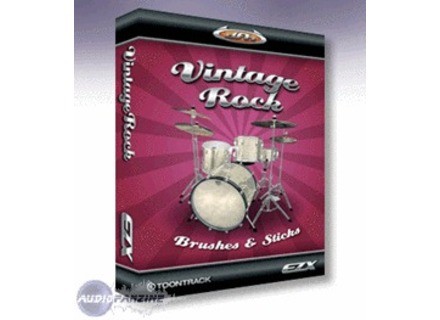 Toontrack Vintage Rock EZX
5
The format of these samples is in a proprietary Toontrack style. This is an expansion for ezDrummer, so these drums can only be used in your original ezDrummer plug-in. It is based on individual multi-layered drum samples which is organized into kits, and you get a few different kits to choose from with the ability to mix and match different drums from different kits. You are also given a large MIDI library of different grooves. The MIDI library for this expansion is really great, with some really creative grooves that can help inspire writing.

The drums on this really do sound vintage. Everything is very dead and muted sounding, which reminds me of drums from the 70's, especially the Fleetwood Mac type. The drums are still very full and powerful sounding though, and you can mix the balance of them in the built in mixer. If that is the sound you are going for, you won't be disappointed. They did a great job with the sample layering, and there is a humanization feature, so you really can get very realistic sounding drum tracks. This particular expansion also has the best MIDI grooves of the whole ezDrummer line in my opinion, so it is much easier to suit the grooves to your song. You can also of course drag and drop the MIDI files out of the MIDI browser built in to the interface so you can edit the grooves to suit your music.

I have had this expansion since it came out, since I am a big fan of the ezDrummer line. The best thing about this is the ease of getting a great vintage drum sound, which can be difficult to match with real drums, especially if you only have a live sounding room. The drums all sound very close and dry, which can be desirable depending on the song. If I were to complain, I would say that the cymbals are not really that good sounding. The same with the hi-hat, it's a little bit chunky sounding. The drums and toms are great though. If you want a vintage drum sound, I know of no other product out there that can match this one, so it's a great value. I would get it again, I use this all the time.
Did you find this review helpful?yesno
»

Toontrack Vintage Rock EZX
5
This bank is designed to base for EZdrummer. We then must be the last to use it, or Superior Drummer 2.0, with which it is compatible.

As usual with Tootrack, authorization is done online and the bank comes with a bunch of MIDI loops ready for use.

In vis-à-vis the sounds in Superior Drummer or extension Custom & Vintage, we are facing a battery treated: it certainly will limit the possibilities, but the blow is used directly and through MIDI loops provided, you write a drum part that sounds in 2 minutes.

The sound is very dull, no reverb, and thus far removed from the kit pop / rock. I am also almost all my projects with either the Pop / Rock base, or with the Vintage Kit as both are complementary to a sound point of view. So, I would say that if you play rock, pop or variety, expansion Vintage Rock is undoubtedly the first bank to buy to complete your arsenal of drums ...

Obviously, in terms of realism, the small bank is behind by large banks of Superior or BFD (as felt especially in the cymbals) but once in the mix, it holds the road and viciously as c ' is very simple to use ...

I love the sound bank, very 70's where the Pop / Rock provided with the basic EZdrummer side early 90's: its matte or groovy music while compressing tracks room to catch the big sound to hard rock Led Zep, it is still very interesting. The brushes are a nice addition though, alas, these are just the brushes hit: not swich, and I prefer to fall back on REX for it.

Interface side, everything is simple and well built (see my review EZdrummer) and as the bank is not ultra gourmet, it is a tool of choice for models of quality.

Among the regrets, I will mention the names of MIDI grooves, not at all suggestive (sequence of letters and numbers), which is a default on all Toontrack Virtual batteries. I also liked to have more grooves necessarily, even if there is already plenty to do. Among the flaws, point out finally that the passage of a MIDI part performed by the Pop / Rock on the Rock Vintage is not always very happy: the balance of batteries do not seem to be the same and it charley feels: he must then play the volume or adjust the velocity of notes ...

Hard to talk about competition as it is an extension to 69 € € 119 for a product. I guess in XLN Audio Addictive Drums is offering some interesting things but I do not know. As banks Vintage for BFD or Superior Drummer, they are really in a more comprehensive and 'sound engineer': the sound is dry, and everything is done in terms of treatment.

The only sound plan, I admit that I was cons by many fooled by the 70's Abbey Roads Native Instruments makes me viciously in the eye, although it seems much less ergonomic and much heavier ...

In any case, if you already EZdrummer, rush on ECTT add-on, especially since the promos are not uncommon in Toontrack ...