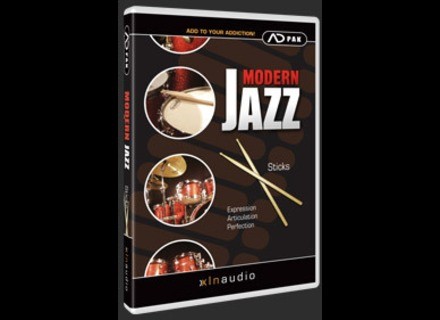 XLN Audio Modern Jazz - Sticks
5
The Modern Jazz pack for XLN Audio's beautifully simple program to use Addictive Drums, is a great addition to the line of drums that is, as its title says, a set of jazz drum kits, tuned for jazz purposes, with sticks rather than brushes. This program adds a bunch of kits tuned to a bunch of different presets for any kind of jazz you can imagine. The challenging part, of course, lies in getting your skills in programming something as spontaneous as jazz up to par. So, let us get down to it. This is a pack to be added on to the base program XLN Audio's Addictive Drums. The main draw of this program is how convenient it is. It is nowhere near as comprehensive as some of the other things on the market like Toontrack's Superior, but there are presets preset presets. When writing in a DAW, presets can be incredibly inspiring, as you can listen and tweak, rather than tweak toward an imaginary goal.

Surprisingly, I was incredibly satisfied with something as nuanced as Jazz. I did not expect it to be this easy to get great sounds for a genre that is all about articulation, but underneath a piano and a vocalist and a bass, this drum kit, worked with properly, sounds incredibly authentic. All of the presets are there to help, and even though the tweaking in Addictive Drums is a bit limited, rarely do you find that there is not a preset that is at least roughly close to what you want. Another good way to look at it is obviously to treat it as an actual recorded drum sound, and you can route FX chains to tweak them dry normally in your chain in your digital audio workstation.

For the type of music I enjoy doing, these drums are perfect. They are crisp, and not too overwhelming like many different drum sounds. They may lack the bigness and explosiveness of other kits, but they are not trying to be that way, so I heartily recommend this add of pack for those of you who need a jazz drummer but do not have one.
Did you find this review helpful?yesno
»

Published on 08/18/09
Modern Jazz—Sticks features a Premier Gen-X kit with a Ludwig Acrolite snare along with cymbals and percussion from Sabian, Meinl and Paiste.