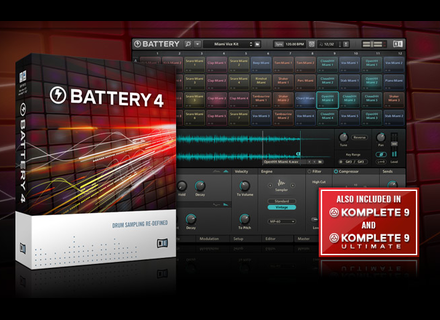 Battery 4 With version 4 of its “drum sampler” included in both editions of Komplete 9 and available separately, what does Native Instruments propose to do ? Answers below. Read more…

Native Instruments Battery 4
2
This version 4 of Battery is a total mess. A lot of things have regressed compared with Battery 3, and finally only little evolution.

Compared with Battery 3, here is a list of what was lost:

- It is no longer possible to rename several cells at once.
- "Random" mode is now totally erratic, plus it lost some features.
- If no sample is affected to a certain cell, there no longer is any visual indicator to show the cell is being played by the host.
- Some cell colors are hard to distinguish from others.
- Cells are too small and hard to read.
- The envelope curve that used to be shown over the sample's curve is no longer there.
- The cells no longer indicate the audio outs they are affected to, nor the key that triggers them.
- linking cells to each other (for instance so that the kick and snare are triggered together whn pressing a single key) is now a pain, even if before it wasn't as easy as it should be.

And still the same lacks inherited from Battery 3 :

- No synthesis to emulate drum machines or create new sounds.
- EQ is ridiculous and not intuitive.
- No included flanger/chorus effect.
- No test cell (to test sounds without disorganizing the current active cells ans so as to gain space).

As for the good points:

- Filter, saturation and transient designer sections were added, as well as automation.
Did you find this review helpful?yesno
»

Published on 09/19/14
Native Instruments has released maintenance updates for Battery, Reaktor and Kontakt, in order to add the new MIDI keyboard support.