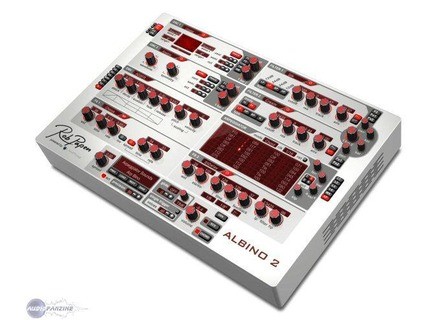 All user reviews for the LinPlug Albino 2

LinPlug Albino 2
5
Nothings missing here all good. but then nothing new

Kicks ass! Presets are nice too

Its a softsnyth dont think its gna break...

Originally posted on FutureProducers.com
Posted by: dejavo ( 2-, 2006)
Did you find this review helpful?yesno

LinPlug Albino 2
5
Supports automation. Nice manual. Boasts plenty of ways to get just the sound you're looking for. Low on cpu!

Navigation is a snap. Everything's all laid out on one screen. Very easy to use and with so many options availible.

This is one of my favorite vst's to play on simply because of the phat lush sound that comes out of it. Even the presets all sound great and usually presets are useless.

I would consider this one of the top quality vst's out right now. The quality of sound and interface is top notch.

I often get sidetracked just playing around on this. If you're a vst junkie go get this demo off the Linplug site. It sounds great.

Originally posted on FutureProducers.com
Posted by: Esthetix (January 2-, 2005)
Did you find this review helpful?yesno

Average. To use it for presets only is a snap. Building your own sounds is easy, bt you must familiarize yourself with the GUI. There are many buttons that when pressed will display the various interfaces. For example, you may not see the arpeggiator - clicking the small 'A' button will show it while hiding the previously displayed interface.

The best! Every sound is crisp and clean even when it's distorted.

Never gave me any trouble. I can have 8 or more instances of this running with no problems.

I love it and need it. For synth sounds, this is always my first choice.

Originally posted on FutureProducers.com
Posted by: NFX ( 8-, 2005)
Did you find this review helpful?yesno

crusty tagaz's review (This content has been automatically translated from French)

It is stable,
Gourmet's going to Worse

It sounds a can but it is exceeded baucoup mieu with other synths, which is more grain
it sounds rather cold but we can draw sonnorités interesting and very clean.

I have not really useful, except for the subs but rarely.
Did you find this review helpful?yesno
Cookies help us improve performance, enhance user experience and deliver our services. By using our services, you agree to our use of cookies. Find out more.