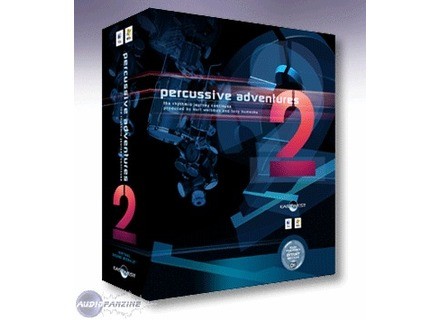 EastWest Percussive Adventures 2
East West percussion adventures 2 can be used on mac and on a pc. The price is pretty high, it costed right around 300 bucks about 10 years ago when I first purchased and used this drum plug in. I will say that it is worth every penny of that 300 bucks though. There are so many options you have with your drums when using East West percussion Adventures 2, you just wont run out of creative ideas and things that you can do with drums . Especially when it first came out , I couldn’t believe the direction that it was taking. You have to think that in 2000 and 2001 when this came out and hit the market, it was very exciting. There really weren’t too many vst drum programs that could take you this deep into drums. Now there are a ton of drum and percussion vsts, but then I was amazed.

Im sure you can still get your hands on this software now if you really wanted too. I think they have upgraded it many times since it first came out. Im not sure if I would still pay the original retail price for it thought because there are so many other similar programs out now that are a little cheaper and they are newer.

But its worth having this, this was cutting edge digital drum technology when it came out over 10 years ago, I still remember using it like it was yesterday and if I could go back in time I would purchase it again. I don’t regret anytime using this vst. I still have the vst but don’t use it much anymore, I have since moved on to so many different percussion vst’s over the years. But there is no denying this is a great percussion vst.

ortax-creations's review (This content has been automatically translated from French)

EastWest Percussive Adventures 2
3
Installation quick and hassle-free
We are in the Native world, it's clean and direct, personally I like

on a core 2 duo running here all alone

His side, obviously nothing to say! C'estpuissant and very clean.

After the coup of course we regret on the principle of long series of loops that leads indirectly to produce prefabricated music. What you'll use the default will be hyper recognizable. Besides, I invite you to listen to the tunes of TV musicals or funds for a documentary or the weather, and to identify any particular use of a sample. Native, Spectrasonics and many others, are used everywhere!

Percussive Adventure II uses the Native Instruments Intakt Moturi which allows you to apply various effects such as destructuring enough delay (few presets but all originals), distortion, filter, LFO, ... This bond is also possible to quickly slice a loop in the middle of separate elements.

The mixture separated elements + effects can therefore largely depart from the context of the original loop and here at least it's enjoyable.

But now, apart from these few good notes, it is fast on his hunger anyway. Being from loops may interfere in some. He was very nice to have all the samples directly cut and ready to play rather than having to play many minutes (hours?) Mouse to slice loops correctly (because the automatic slicer is not working very well it must be say).

In conclusion when you see the app you feel you've done to impress and it targets young Maoists, at first you have fun but you get bored after 5 minutes. The price is reasonable value but in the end I would stay on and then uninstall the demo!

Listen to the 6 audio files about EastWest Percussive Adventures 2 »