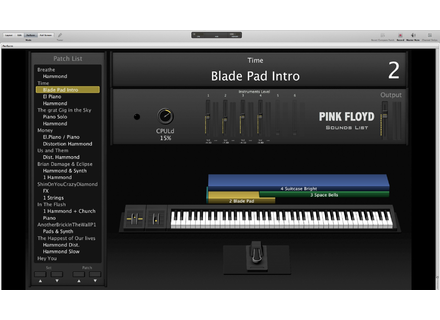 Product replaced by the Apple Mainstage 3.

Apple Mainstage
5
SImple enough to set up. Obviously depending on whether you want to use this with keys or guitar you will need a midi and/or audio interface.

OSX only, do I need to say more. I expect Apple products to have rock solid drivers to run rock solid on Apple hardware.

What we have here is essentially a "rack" that lets you run the Apple instruments, amp sms and Apple and 3rd party plug-ins as a standalone app without using your DAW.
I came across it when it came bundled with Logic Pro. Now Apple sells it in the App Store for $30 by itself.

The basic idea to turn my lap top into a amp modeler was never of any use for me. However when I toured in Asia the first time 2 years ago and only had questionable rental amps and my "pedal board" consistent of an "emergency" overdrive pedal I packed this came in very handy.
I used it with a small audio inter face (Apogee Duo) either in the loop of an amp, or worst case scenario in front of the amp.
Signal chain was guitar, over drive, into the sound card from there into Main Stage, out of the sound card into the amp.
When the amp had an effects loop it was guitar, over drive, amp, loop to sound card into Main Stage, sound card back into the loop of the amp.
This way I used Main Stage to add my have AU plugs. I ran the PSP Audioware PCM 84 for delay, Soundtoys pitch shifter, and U-audio tape sim plug. It was such a god sent to have that option. Saved my butt on pretty much every gig.

With main stage I have my back-up set-up in my laptop bag and am prepared for any horrid gig surprise. I guess absolute worst case scenario I could go direct.

Apple Mainstage
5
Yes, mainstage installed without any problems. Being that is Mac only software, it installed on my Mac perfectly. Yes, the general configuration and setup is simple. It gets a little more convoluted when you start assigning the knobs and switches on your &quot;layout&quot; to your hardware controllers, but its totally doable with a little thought power and the tutorials found on Apple's website. So far, Mac's audio program manuals are really a halfway attempt to solving your problems. I really get the &quot;dirt&quot; when I find good tutorials on the web.

My computer set up is a Macbook (2.2ghz, 4gb ram, 320gb HD), and I use a Presonus Firepod and Presonus Firebox for my Audio interface. Mainstage works great with this setup. Well, I guess it would be a 10 of 10. I have never used a program so intuitive and user friendly to accomplish this task. So far, Mainstage has only had two problems. One is with Rob Papen synths (blue and albino) and the other is with Synthogy Ivory. The RP synths cause Mainstage to crash every time so they are out. Synthogy basically gets stuck in the forefront of the screen and I cannot close it out. There fore blocking the view of Mainstage. Other that that, it has no problems.

I have been using Mainstage for about 1 year. What I like most of all is the insane amount of control you get. You can assign almost any knob/switch to be controlled by almost any hardware device. Also, its really just the best tool for a live, computer toting musician I have ever come across. What I don't like is the few problems I spoke of earlier, but those may just be the plugins themselves. This came in the Logic pro 8 package. For $500 you get a complete studio DAW with all sorts of goodies and this gem of a program. I say its the best value on the market. I would absolutely buy this program and the rest of Logic 8 in a heartbeat.

Other Apple virtual Racks/Hosts for Plug-ins