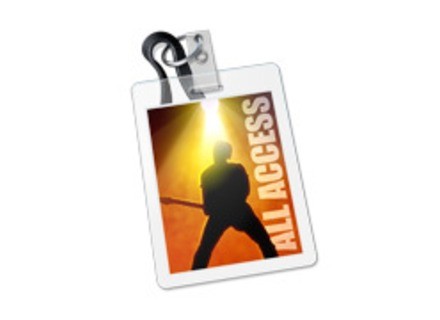 Product replaced by the Apple Mainstage 3.

Fabien Fons's review (This content has been automatically translated from French)

Apple Mainstage 2
Did you find this review helpful?yesno
»

.Gwe's review (This content has been automatically translated from French)" Very good for a set of keys!"

Apple Mainstage 2
Mainstage software is very affordable (currently € 24 on the Appstore) dedicated for Mac, you can use a customizable interface to wish to use any plug in Logic.

As a reminder, there is a "concert", which is the recordable file in which we work, he configures an interface with controls, which will be the same for all "patches" of the concert, the patches can be organized in different banks, then affects the Mainstage controls MIDI hardware controller on the one hand, and a setting in your patch channel strip (which may be the ones you saved in Logic Pro), you can easily find parameter in a tree structure that will be proposed to find all the settings on your channel strip, or general controls of the concert, as the tap tempo metronome or so.
Everything is designed for live use, and in my case, mainly for practical keyboard.

I use:
1. For keyboards: Most Logic virtual instruments are very good presets with the software keyboard is very good.
Specifically, it puts on its GUI controls all MIDI master keyboard sound (rotary encoders, linear, buttons ...) and assigns them to the keyboard with the "Learn".
Then, for each of your patch, you use the same interface but by giving each of your controls different functions for each patch, and it is very functional!
for example: set my keyboard allows me to use my 9 faders for drawbar organ or the same organ combo switches transistor (freeware Martinic that are very good!), knobs for saturation settings chorus, reverb and delay, and a pressure of my buttons "> l" I go to the next bank, electric pianos, yet with each of my controllers lots of settings ... TOP!
For those who do not have Logic, they can use their other AU instruments and effects compatible with Logic.
It is also possible to make several layers, overlay or split.

I could not do without it, my sound card + master keyboard suddenly become one pinaise expander or Nord Electro, more versatile, but with the disadvantages of the computer: I would have to do the update soon I few stability problems.


2. for guitar: there are a lot of nice preset, again, with the function to learn we learn controls various controllers, like any MIDI pedal on the market, and you can use the Logic effects, but also its AmpliTube or I do not know any other AU. I do not really use because I have a great hardware config.


There are also presets table mix, the interface very well done that it only remains to assign the I / O and MIDI controllers, but also presets for guitar or keyboard looper, the preset for voice etc..


Before I played my guitar and keyboards directly Logic, and that it killed my creativity really, really not practical! Mainstage but bluffing is simple to make plug ins very playable and more intuitive, and devote his mind in the game and not the infinity of possible settings on Logic, it's really nice!

At that price, do not deny it!

Enix49's review (This content has been automatically translated from French)" Bluffing!"

Apple Mainstage 2
Mainstage 2 is part of the offer Logic Studio 9. For myself I bought the version on the macapp store.
It is installed on my iMac i5 4 cores with 12GB of RAM. My sound card is a PreSonus FireStudio. Is it useful to say that j'au zero latency?
The sounds are extremely convincing! So yes, it does not react directly as my tube amp, but in a mix in Logic is more than bluffing or saturated in clean! J'obtient a result as good a sound recording by an sm57 + preamp modeling on Marshall.
Having played for a while with Podfarm, I find Mainstage sounds much more natural and that modeling is a step up. Some sound engineers are beginning to say that the current models provide an identical record in the studio taken by microphones. Honestly hard to tell the difference on a model produced good! on the other hand live while I keep my amp lamp, we never change! So a very good app!

Apple Mainstage 2 manuals and other files

Other Apple virtual Racks/Hosts for Plug-ins