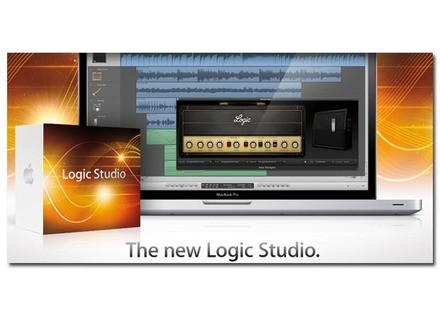 Logic Studio 9, General Sequencer from Apple in the Logic series.

Apple Logic Studio 9
5
Apple Logic Studio 9 was my main program that I would use a year ago. It was my go to program because of the VST’s that come with it. I think Logic has some of the best “built in” VST’s out of any program that has come out so far. Everything with Logic 9 is easy to use if you are already familiar with it, if you are new to Logic then you will have some issues and you will need to take a long look at the manual. The manual is in depth and has all of the info that you need to troubleshoot or just learn how to navigate your way through the menu’s in Logic 9. When you purchase Logic 9 you will get a few disk , the bonuses are Soundtrack Pro 3, Studio Effects, MainStage 2 and a few others that I cant remember off the top of my head. Apple also has a website where you can watch tutorials on how to work with Logic just in case reading the manual Pdf isn’t your thing.
I have been using Logic since 7 came out years ago and I continue to use it now on my Macbook Air. I never really finish a full song in Logic though because I like to work in Pro Tools as well. Some people say they would rather use Logic than Pro Tools but to me they both go hand and hand if you know how to use them correctly. Logic 9 was a great improvement from Logic 8. Apple continues to keep adding new features to Logic that keeps me on my toes. If you have a newer Mac computer, I highly suggest investing in Logic! It will be one of the best investments you have made in your music career because it is probably the best music creating software from composing to recording all in one that is out now. It is a must have.

Apple Logic Studio 9
5
Apple Logic Studio 9 is a great DAW and sequencing software that is for MAC only. I do wish that it was available for windows computers though so I could have it on my laptop and take it with me more places. Logic Studio 9 is a software that I have been using since Logic 6 or 7 and I keep moving forward upgrading it because I just love the functionality of the program itself. Its very easy to use, but not at first it will take some understand of the menus and basic functions before you will be able to really get creative with it. It took me a few weeks to really get the swing of things but after that I was good to go.

One of the things that I really like about it just how the mixer is set up, the mixer setup makes it really easy to add my effects and mess around with them to get the desired sound that I am looking for or want to create. Also, the basic stuff that comes with Logic Studio 9 will be enough for you to get going you wont need to purchase any plug ins right way untill you decide to start expanding. It comes ready to create beautiful music right out of the box. On the downside, the program is not cheap at all. Also, I wish it was a standard program that came with the mac instead of Garage Band. Since it only can be used on a mac they need to work out a deal to where it comes with the mac automatically then I think more people would be familiar with it. But when it comes to the Mac DAW’s, this and pro tools own the show!

Many people compare this to pro tools, I really wouldn’t say it is like pro tools but it just depends on other equipment that you have and what you goal is to do with music. There are ups and downs to using both. But all in all Logic Studio 9 is worth the pretty penny it cost.

Apple Logic Studio 9
5
Logic Studio 9 is Apple’s latest version of their famous Logic DAW. The package includes Logic Pro 9, MainStage 2, Soundtrack Pro 3, tons of plug-ins and various production utilities to help you further polish your sound. This version combines the stability of Logic Pro 8 with the additional features of FlexTime, Amp Designer and a couple of other cool things.

If you’ve never a professional DAW before, Logic may be a bit overwhelming. However, it’s far more intuitive than most other DAWs out there, in my opinion. The colors are easy on your eyes, it’s highly customizable, contains logical placements of various tools and makes it easy to get a professional sound without having to go through too many tutorials just to learn how to record.

Flex Time is a new feature that Logic Pro 9 brings to the table. It’s pretty much like Pro Tools’ Elastic Audio, but I find it works a bit better. The detection of timing seems to be more intelligent, and that’s the biggest advantage I’ve found. Aside from that, it’s very similar, so anybody who is coming from Pro Tools shouldn’t have too many issues getting used to the new DAW.

Logic Pro 9 also brings some guitar modelers to the table with the help of Amp Designer. I’m usually critical of modelers out there, especially ones built into DAWs, and this is no exception. It’s really not that great for high gain tones, and it seems to be more centered towards clean to low gain tones. I’m hoping Apple with further develop this, but we’ll see what happens.

All in all, the DAW is a nice upgrade from Logic Pro 8, but some features do leave you wondering why you paid so much for an upgrade. If you’re happy with Logic 8, stick with that. Otherwise, check out the upgrade. Flex Time has been a lifesaver for me, personally.
Did you find this review helpful?yesno
»

nixt's review (This content has been automatically translated from French)