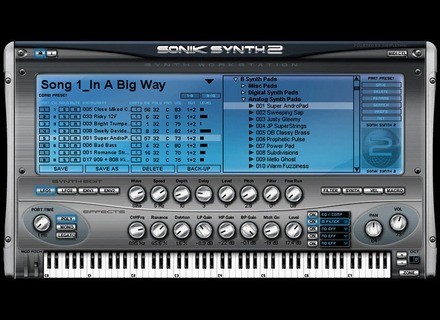 IK Multimedia Sonik Synth 2
4
Sonik Synth 2 is a pretty good workstation with a lot of different tools for using and designing your own sounds. The program is far more in depth than what I thought it was going to be back when I purchased it. It comes with over 5 thousand sounds. I have not had many VST’s at all that come with that many sounds, and also the sounds are so easy to edit and change to make them your own. The possibilities are endless with this software. It can run on either Mac or Windows systems and the price of it is very affordable as well.

The Sonik Synth 2 can be used as the main part of your whole setup, it doesn’t just have to be used as a sound module or VST. Sonik Synth 2 seems to be like a do it all software , but it gets over looked in other departments besides the sounds. A great part of using Sonik Synth 2 is with the ability to “Stack” sounds, basically just layer sounds and add some effects to them and you can really get some cool unique stuff that you can almost grantee that other musicians wont have the same sounds as you.

The quality of the sounds are very good, they can be used for almost any style of music you can think of. There is also a built in “search” engine. Where you can basically just type in what type of sound or instrument you are looking for and it will bring them up. Because when you have 5 thousands plus sounds it is easy to lose sounds or have a hard time finding one that you want. Just search , its that easy. They have constructed Sonik Synth 2 to be as user friendly as possible. I have used the first Sonik Synth, and Sonik Synth 2 blows it out of the water!

IK Multimedia Sonik Synth 2
3
This VST installed nicely and quickly and has worked nicely on both of my computers. I have used it on a low end computer (1.8GHZ pentium and 1gb ram) as well as my current (2.5GHZ Core2Quad & 4GB ram) and it runs decently on both. On the low end PC it does suffer some delay and latency in the sound, similar to Sampletank. Maybe this is because it uses the same engine. But other than that it is pretty fine. The library of sounds is shown on the GUI nicely, in the same way as Sampletank. It is nicely organised into instrument types and then the actual instruments. It works nicely in both of the DAW's that I use, Ableton and FL Studio.

This software works well in FL Studio with no hiccups, however I have to run Ableton Live in administrator mode to get it to work similar to as I have to do with sampletank. If not ran in administrator mode, Ableton displays an error saying that it is not a supported VST. The synth sounds that come with this VST are pretty decent and can be used in all sorts of types of production, however they really do need layering to get any professional use. The memory usage is also low for a VST of the nature that it is, it has hundreds upon hundreds of preset sounds in the library. There seems to be a problem with stability though, as this VST has crashed FL multiple times upon loading. Most of the problems are exactly the same as Sampletank, probably because of the same engine being used.

I'm not really a fan of many of the sounds on offer in this VST, as I prefer the synth sounds in other vsts to this. The sounds on this are pretty dry and flat, there is nothing that really stands out with any of the patches in this VST. These sounds are designed for layering. I would probably not buy this VST if I knew what I do know now as I was expecting a studio ready vst straight out of the box filled with hyper presets that can be used in any production.

IK Multimedia Sonik Synth 2
5
As with all of my IK Multimedia plugins, it functions perfectly in Logic 9, Ableton 8 and as a Stand alone unit.  I have not actually needed to reference the manual for this particular synth.  The reason is IK multimedia uses the same interface for the Miroslav, Sampletron, and Sampletank, and I have used those one prior and referenced there manuals.  So, if you learn one, you pretty much learn them all.  But from what I know from the others, IK multi writes clear and useful manuals.  Yes, the general configuration is simple enough.  The only thing that threw me at first was figuring out how to run more than one patch under the same Midi channel (you just click on it and drag up or down to get the appropriate number).  Other than that, its a pretty simple synth to get used to.  Yes, the typical options are right in front of you.  You get a few knobs for each tab (env1, env2, lfo1, etc....).

I work off of a Macbook with Presonus gear.  The software works great with this setup.  So far none of my IK Multimedia plugins have ever crashed or lost any presets.  The midi mapping works great with my M-audio controllers as well.  With all that said above, I give this plugin a 10 out of 10.  I have been using this plugin for a few months now.

What I like most about this synth is its overall broad functionality.  If you were to buy just one IK Multimedia plugin, this is the one you need.  It has a little taste of everything.  Ironically this was the last IK multimedia plugin I bought but it should have been the first.  Some shining points of this synth are the Mellotron samples and some of the electric pianos.  The one thing I don't care for in this synth are the "real" piano patches.  They are far from real.  They are interesting for reggae and some silly piano sounds, but thats about it.  I paid a little over $200 for this synth.  Overall, I thinks its a pretty good price for the nice size library you get.  As for precision and quality, its pretty spot on for most of all the patches.  Again, the "real" pianos aren't very good, but everything else has a place.
Logic 9 has a pretty similar sound bank, as well as the other IK multimedia plugins.  This one holds its own against all of those.  Yes, I would buy this synth again, I only wish I bought it sooner.

IK Multimedia Sonik Synth 2
5
The features, besides the new Combi presets, are pretty much the same as on Sampletank 2. Not like those were bad, but a few adjustments could have been made.

The great thing about IK's stuff is that it is so damn simple if you want it to be and really advanced if you want it be too. The best of both worlds I guess, but you can be up and running after just installing it...no manuals needed. Which is always very nice...

WOW....I really can't put into words the sounds this thing has. I was initially expecting just another Sampletank with a different soundbank...yeah, I was wrong. First, this thing comes with a slew of Combis like the ones found in Triton boards, that sound amazing from the get-go. All types of layered patches that just work with anything. Second, there's like 6 main categories of sounds and each one expands into multiple levels of banks and alternate categories until you're looking at so many freakin' categories that your head begins to hurt. Lastly, once you actually find a few to start playing with, you get lost in this alternate universe of disbelief because of how good these things sound...and there's something for everyone: leads, basses, percs, and strings for R&B and HipHop...there's motion pads, deep strings and far-out synth leads for Dance and Electro. The quality is definitely there.

The quality is there...the sounds speak for themselves. If your computers sucks...dont bother. My computers is built for making music and so I didn't cut any corners when I made it. I can have 3 or 4 running fully loaded out of all 8 stereo outputs at one time before my box starts to stutter. I'll never need that much, but I know I'm good if I do. Be careful too if you have a ton of plugins on your box, especially if they're all cracked...plugins this well made depend on a clean system with all system files in place. If your box has been tweaked, if you have files everywhere, if you use a cracked host program or your registry looks like a spiderweb of crap...don't be upset if this or any plugin crashes. Its your fault...you've been warned.

I've used this on a number of tracks..both personal and for clients. I'd recommend it to anyone searching for an all-in-one synth workstation solution...I think a demo is available...check it out if you need more reassurance. I personally love it like my left nut, but thats just me..

Did you find this review helpful?yesno
»
Read the 5 user reviews on the IK Multimedia Sonik Synth 2 »