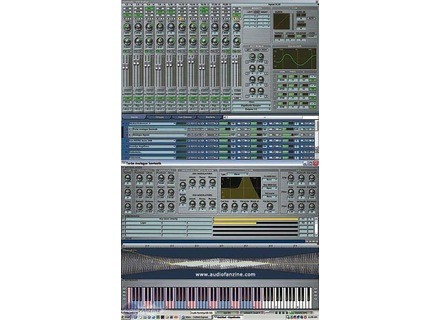 Wills01's review (This content has been automatically translated from French)

Tascam GigaStudio 3
4
Hard ...
Once the PC is gone, bathes ... on the other hand, I very often messages that tell me that GigaStudio badly and booted my pc just REPAIRING a "sv re "error advising me to uninstall the drivers GS3 ... So it's not great. I use a Mackie Onyx 400F and sometimes with Hoontech, both as perfectly compatible GSIF yet ...
C is much better with GVI I bought too, but you lose a lot in ergonomics (on minimalist GVI)
Like many, I believe, I used to read GS3 essentially sound banks and so I have no opinion on the publisher of sample which I never use.

Once launched, therefore, it works perfectly both in Stand alone that Rewire (Sonar). I do not feel no latency and sounds are excellent (but especially the editors of samples that must fliciter in this case).
Overall, these installation instabilits are a problem even when ...

I use it for over 7 years. I find it more n'volue, unfortunately. The last upgrade is simply theft ... there is no evolution and rating very expensive (compared to the evolutions of Sonar, for example, are really significant!).

What would be really nice is that Tascam put it in the closet GSIF driver to switch the ASIO ... I tlcharg Kontakt version dmo, the iar me much stable but miss convert my 80 GB of sounds Giga formats ...

My souhai: producers samplers such as NI, Tascam, Vienna SL ... agree on the organization of Keyswtichs and they offer a hardware interface to control rather than where we keys o ever remembers is legato, the pizzicatto the bow shorts ... which are once down (towards the C0 and C1) and once on top (to C7) ... and like all mond not en'a a keyboard 88 notes and if it was, it is to play sounds 88 notes ... it would be desirable that these KS give way universal control interface is ... build on the "legato", "pizzicato" .. without asking any question ...
Did you find this review helpful?yesno
»