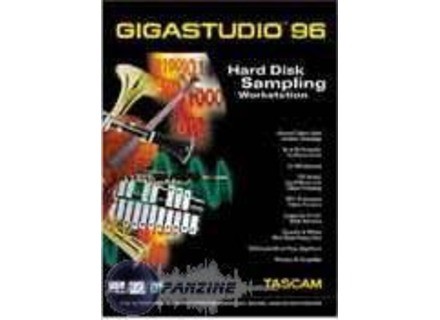 WESTCON's review (This content has been automatically translated from French)

Tascam GigaStudio 96
1
The intallation is no problem Droulez notorious redmarage suvi A scan of a hard drive affect the Gigastudio and go ................ .....
I install this app with Creamware hardware, and M Audio Event no problem .........
However, it is an exellent hard drive of a major dot cache memory and turning 7200 t / mn.
In this regard, one must bear in mind that hard drives are subjected trs evidence and let you go
without further warning. I personally dtruit 2 IBM drives in 4 years. Systm backup IMPERATIVE.
The congig gnrale follows a simple routine and poses no BLME.
The manual is no more.
Registration for dblocage from TASCAM is a true galre and took me over a month !!!!!
(They can not find my name .......) short!

I use this app since its inception: the GigaSampler. If t vritablement innovative in its time by allowing the use of sound banks gigantic, fabulous quality and especially IMMEDIATE exploitable (to import a piano sounds classic 2GB take 20 seconds! ), we must recognize that today's acquisition and APRS TASCAM it is the total cata. The edition of sound that passes through the 2nd intermdiaire a soft (gsed) is still unstable, tortuous, and dpourvue basic tools such as a simple loop editor or a standard! Gnrale stability of the whole app is more than doubtful. The forum site is also blind issues (English mandatory) unsophisticated musicians who are tired of rsoudre the problem instead of the composition (see it absolutely difiant) The level of rponses from Tascam is the future ..... NUL! It is better to be blalze computer to embark on the adventure. The effects are fully included the indigent and the soft n'intgre still open on VST plugins or DirectX. Version 3 is delayed for more than a year. In light of this platform dveloppement seems totally stops. Aujoud'hui should leave this material on the Tagra your favorite retailer and to ogle plustt KONTAKT HALION or offering more features and opening and followed by their publishers .
This app is a dead product until further notice and selling prices DLIR a date .... Away!
Did you find this review helpful?yesno
»