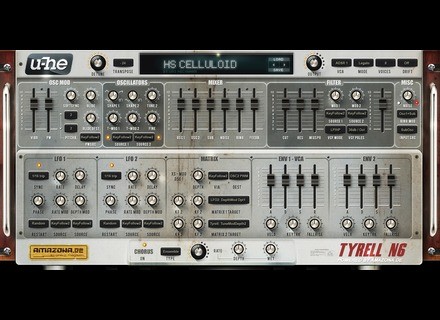 U-He Tyrell N6 v3
5
Tyrell N6 is a substractive synthesis virtual instrument which is very complete for a freeware.

It features 2 oscillators (sine/tri/saw/square for the first one, saw/square for the second) plus a sub (square), plus a noise generator (white or pink). To modulate the oscillators, there are a vibrato, a “pulse width” (which only affects the squares), a soft sync (which only works if the oscillators are detuned), a ring modulator with feedback. Oscillator 2 can be detuned. There’s a portamento, and that of oscillator 2 can be set offbeat for strange results.

There’s a ringing filter that can be BP or LP/HP (you can get gradually from LP to HP using a MixSpread pot, providing unusual effect sounds in the in-between positions). Slope can be set to 12, 24 or 36 dB-per-octave. Great possibilities of filter modulation.

Then there are 2 LFOs which parameters themselves can be modulated, 2 ADSR envelopes (which can also be modulated) and a matrix. The latter allows to apply a frequency modulation from oscillator 1 to either oscillator 2 or the filter, and to route two controllers to a same parameter (with one modulating the other).
Finally, there is a single effect – a chorus, which is well enough. To finish with this overview, let’s mention that Tyrell can work in mono, legato, duo, poly and unison 2-to-8 (detonable) voices modes.
As far as I know, there’s no manual for Tyrell N6. I regret it as I would have appreciated some precisions regarding some, say, “original” functionalities such as the Drift (an analog model emulation perhaps?) and Fallrise (on envelopes, that has the sound back up after decay).

This freeware is very stable and never caused any problem on my old Mac Pro with Digital Performer.

All in all, we get a synth that’s quite powerful for a freeware. The ring modulator, feedback and FM on the second oscillator allow to get rather original sounds. But what makes this Tyrell interesting also are its modulation and control allocation capacities (by the way, all parameters can be MIDI-controlled using the MIDI learn feature). Hence, you can get beyond the “factory” 500 presets.

Tyrell N6 is one of the most complete freeware synths you can get on a Mac (but of course it also works on PC). Of course, if you already own Absynth, Massive, Predator, Gladiator or others, Tyrell may not bring you much. Still, even in such a case, there’s always use for a small, quick-to-program synth such as this of Elek7ro. Anyway, a penniless homestudist will always find such synths very useful as their quality makes them a really great deal.
By the way, Tyrell’s maker U-HE also offers numerous great products such as the Zebra synth or the great Uhbik plug-in series. As for Tyrell, it’s available here:
https://www.amazona.de/amazona-de-freeware-synthesizer-tyrell-n6-v3/

Published on 04/09/13
U-he and Amazona.de announce the availability of the third version of their Tyrell N6 free virtual synthesizer.