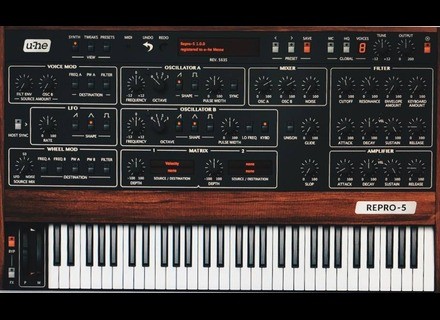 U-He Repro-5
5
Mastering a plugin requires time, and the time we can dedicate to music is rare enough (and the plug-ins that come with our DAWs numerous enough) to make the purchase of a plug-in a much thought out act – at least, that’s my approach of things, and perhaps it’s yours too. In the end, I purchase very little of them and download even less freeware. So, Repro is one in not so many, and there are good reason for that!

First, it doesn’t include one but two synths : a mono synth taken from the mythical Pro One, and a polyphonic synth derived from the legendary Prophet 5. Promising, ain’t it?

Then, using the Repro(s) doesn’t require spending long hours reading the user manual! The designs are indeed very close to those of the original models, and even for those who do not own a Pro One or Prophet 5 getting interesting patches will be done in no time provided you now at least the basics in subtractive synthesis. And if you don’t, well, the presets are already so inspiring that any of them can do… The preset bank is really well stocked and quality is there too, plus the preset manager is well done.

The happy owners of one or the other hardware models will be able to fill their lack by buying the bundle for the (relatively) low price of 149€ (it was available for 99€when first launched).

As for those (yes, some people do!) who own both original models and are not too much into a synth fetish, they can sell them to get other hardware legends (a nice Moog, a tiny Oberheim or Synthi), without losing the Sequential Circuits grain and while staying away from any possible breakdown from one of these aging synths, now in their forties-to-fifties.

As for those with a synth fetish (I know, I’m one!), they’ll either cry for not being able to part with their wonders, or will rejoice for not owning one of them (the good news is, I fall into this category!) while being able to access this sound nirvana thanks to Uhe’s beautiful emulations.

A third point: Repro comes with an arpeggiator/sequencer (for Repro 1 alone), and high-quality dedicated effects for the Repro 1 and Repro 5. These are from being mere gadgets and really take you far, far away from the synths’ original sounds. These effects sound beautiful and are well designes (especially the polyphonic distortion available on each of the channels with the Repro 5!).

Number four: the sound! You’d think you’re there! Rather than empty speeches, you can get your own idea on the question watching the following videos which compare both virtual synths with their original, hardware counterparts.

Enjoy, as they say!

PS : AudioFanzine features two different entries for a same product, as the Repro 1 ans Repro 5 are now available in a same bundle. Both synths have the same overall features and ergonomics (which to me is faultless in that it directly derives from the original models). Both synths could be enough on its own, but it’s a good thing that we get the both of them. So, this review would apply yo the Repro 1 as well!