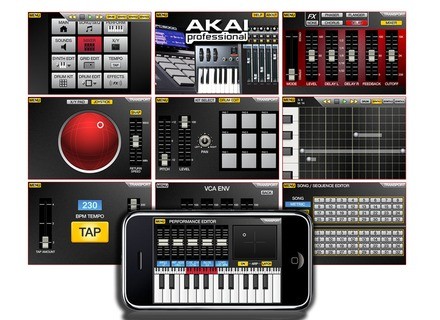 Akai Professional SynthStation v2
4
Standard iPhone app that installs and updates itself alone.
Online help in English only. Not very complete and it seems that this is the same for the iPhone and iPad versions that have become very different. In short, could do better.

At a time when I write this review, the software is V.3

I can not remember the price paid at the time, but now it is 1.59 euros. Suffice to say it&#39;s worth more than the blow.

Note that I only talk about the iPhone version and I have a 3G (at present, the 4S depuii was released a few months to locate). Obviously the iPhone version not changing very much unlike the iPad version they redesigned the whole ergonomics and workflow.

I still crashes but this is rare. I save often in case. The worst thing that ever happened to me this is after work on a track for quite some time, the battery of my iPhone was emptied ... But I was warned but not ... suddenly, I watch out.

I use it since its release. But last year, I use the keyboard gadget Synthstation 25.


The most:
- Integration of the keyboard 25 synthstation nice
- The synth sounds (from the Miniak), effects (Delay, Flanger, Chorus or Phaser) and 50 drum kits: there&#39;s enough to make
- The ability to edit synth sounds so complete: 3 oscillators, ring modulation, envelope, filter, LFO, Modulation Wheel, Velocity, portamento ... a true virtual synthesis tool with a more than adequate (I said that I knew not Miniak).
- The full arpeggiator
- Swing Adjustable instrument by instrument (including the arpeggiator)
- The Pad X / Y it is possible to "automate" by bouncing the ball on the edge of the screen (as in billiards) and can be assigned to almost everything: pitch, cutoff, resonance, envelope. . it&#39;s pretty funny.
- In recent versions, you can record in real time (and only step by step through the gates) but ... (see later).

Cons:
- I have not figured out how to turn the metronome. The doc. is not clear and I think I have been around the software. So it prevents some of drums create patterns in real time. Pity. Well actually, it bypasses by creating a hi-hat to the black in the grid and the rest in real time ... well yeah.
- No edit function sequence in the editor grid. For example, if you set a pattern for the first measurement of a sequence to four measures, there is no way to duplicate the first step on the other. It re-enters it.
- I have not found a way to get the velocity in grid mode. Yet it is taken into account when playing on the keyboard (and can be assigned to the volume and the cutoff filter in a very classic).
- Obviously the movement of the pitch wheel and modulation are not recorded in real time mode. The automation that&#39;s for later obviously. Arghh!
- One effect at a time. Then, dose sending each instrument like a send / return effects loop of standard. Impossible to put a delay on a synth and a phaser on one another: one is chosen and shared by all.
- No support functions Audiopaste / Audiocopy to share with other programs such as multi-track recorder "Four Tracks" or Music Studio. It would have allowed me Laying out a voice over ... damage. We can still get his work in audio and MIDI via wi-fi.
- No way to edit the sound of drum kits. But here we quibble.


In conclusion, weaknesses annoying (metronome, lack of automation, editing sequences) real shame because the sounds and sound design possibilities are very friendly. It&#39;s a real synth / groovebox. And with the keyboard plastoc Synthstation 25 cell was really a tool to carry around everywhere. And there, I look fondly the old Casio VL-tone offered by my mother when I was a kid ... Synthstation although not known to reproduce the sound of drum machine of "Da da da"

I also use Music Studio, Audio-Midi Sequencer slightly more powerful and has better tools for editing sequences but whose sounds (samples) are really cheap. The Synthstation can really have a big electronic sound. I suppose version 49 keys and the iPad version of the software should be possible to foresee a use on stage.
For me the sound, given the machine is at least 10/10. But the rest still poses some problems due to lack of workflow editing functions and practical interoperability with additional software (audio).

And yet I play with every day, so I still put a note reflecting the dose of fun and inspiration I get from this little thing.
You can really get a nice track completely with this "gadget" and export Audio / MIDI can rework it in a real sequencer on his computer.

When we were amazed to discover Rebirth on a PC in 1996-97 and one sees what is done on a mobile phone, it is not always bluffed?