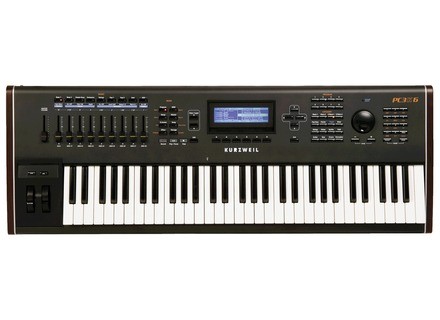 All user reviews for the Kurzweil PC3K6

mrjason's review"I could use my .KRZ sample files with this board"

Kurzweil PC3K6
4
I have been using Kurzweil boards for a long time now and I love the PC3k7, it was just so darn expensive when it first came out. I remember paying over 3 grand for it and really second guessing my self if it was worth it or not. But after using it for about an hour or so I soon realized that I would get more than my monies worth out of this workstation because of sounds and the ability of loading the .KRZ sample files that I have accumulated over the years. Being able to load up sounds from other boards was great because that actually allowed me to sell some of my other Kurzweil keyboards to cover the cost of the PC3k7.

Getting started with the PC3K7 was very easy because it was just like some of the other Kurzweil boards that I have used in the past. Most of the layout and menus are all the same but the sounds are so much better. This board gave me the ability to have up to 32 layers on each program, I was able to get some really great sounding instruments by utilizing that features.

The sounds are very good, and by using the oscillators I was able to get the exact sound that I was looking for every single time without any issues. I would spend hours on hours playing around with the sounds on this keyboard until I got was I was happy with.

Using the PC3K7 has really helped me out sound wise because I was starting to really over use some of the sounds on my other keyboards and needed something fresh to create with. I have so many more sounds now I don’t think I will ever use them all. I am able to create my own sounds and be unique! The keyboard has 76 touch sensitive keys, though it is not the full 88 key version it is still very heavy and I do not think that I will ever want to take it anywhere with me!

Dgé's review (This content has been automatically translated from French)" Excellent"

After discovering the world Kurzweil and a little party rowed on the import of samples (not supported by the publisher Mac) This is really a pure joy to use this keyboard. I advise you to create your KurzFiler prog with your samples, this application is very simple and you created keymap, and encapsulates all programs with a single wav file KRZ ... you can put it on key and ready to load your prog jobs. For the manual, absolutely ask the French to the importer. While purchasing there was only the English manual. For the screen I am delighted because the color blue and the small size is a plus for me ..... good touch screen would be welcome good ... I like not having a TV in my eyes when I plays.

Fabulous sounds of orchestras, especially Rhodes, strings, B3. The piano is always a great bank ... in the future version .... it would be nice to intégréer noise pedals, strings and to plant sympathetic resonance ... you can do it yourself with the effect insert "Soundboard" tutorial on the site Kurzweil. Missing for me sounds WORLD .... I look forward to the future ROM should happen in the coming months.

I used before a MacBookPro with Mainstage, I wanted more power (since Omnisphere is a gulf even on a quad i7) and above ZERO latency ... and the PC3K6 delivers all the POWER and ergonomics that one can dream .
I am very pleased with this material very PRO, nothing that effects the quality makes a big difference. The Ram 128 is quickly filled, as you dig the head to reduce your samples (change their sample rate for example) You can arrive at any sound with this PC3K6, Soundesign ..... Customization with an architecture completely open to your desires.